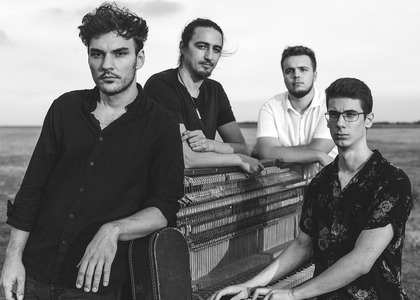 Two concerts are scheduled at the end of October and in early November at Teatrelli, both of which offering us a complete cultural experience just like many other musical events in the same café-like space. On October 26th PERCUSSIONescu, the only chamber ensemble for percussion in Romania, is presenting the concert "Vibraimba", and guitarist Radu Vâlcu together with his ensemble are aiming for a combination of classical and modern in an event which will take place on November 3rd.

Both concerts will be performed under the special guidance of the ConnectArts.ro@Teatrelli partnership.

The PERCUSSIONescu duo is planning an unprecedented performance for the Romanian public at 7:00 p.m. on October 26th: "Vibraimba", a mixed concert in which the marimba and vibraphone create a dynamic combination of styles: jazz, classical, modern, and Latin American. The concert also includes the piece which gave this name, specifically the first composition dedicated to the duo, by composer Andrei Petrache. The program also includes pieces by Bogdan Pintilie, Emmanuel Sejourne, Jesus Salvador Chappi, Csaba Zoltán, and Michael Taylor.

"Percussion is a state within a state", explains the PERCUSSIONescu group, the only chamber ensemble for percussion in Romania. "It is a self-contained structure among the other members of the musical instruments family. There are endless branches of percussion, contributing to any musical genre or style, playing any musical part imaginable: rhythmic, harmonic, atmospheric, coloristic, solo, chamber music etc. Therefore, it is a perfectly functional world, constantly discovering and developing itself, in which creativity is the norm."

On November 3rd at 7:00 p.m. it is the classical guitar which will be in the spotlight. The Radu Vâlcu Quartet is offering a musical language which will incorporate world music influences, jazz, folk, modern music - all of which are to be interpreted in the Quartet's own fashion. The quartet has an all-new repertoire which guitarist Radu Vâlcu pictured together with Mihai Balabaş (violin), Andrei Petrache (piano), and Răzvan Florescu (percussion). Aside from the already-existent repertoire, the four musicians often create compositions together which one by one gets included in their concerts; one of the musicians suggests a theme which is then taken and transformed by the other three and then it is developed until it becomes a common experience. At Teatrelli, Radu Vâlcu, Mihai Balabaș, and Andrei Petrache will be playing alongside Alexandru Badea who is the special guest of the concert.