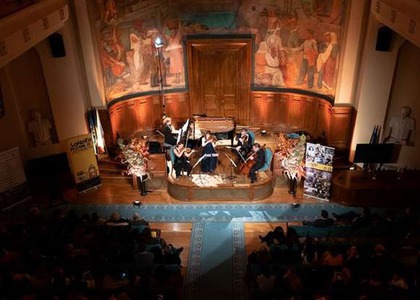 The month of November debuts with the SoNoRo Festival, taking place this year between 1 and 17 November and bringing to the stages of Bucharest, Sibiu and Cluj-Napoca 30 renowned musicians from 25 countries.

The 20 concerts propose to the public a reunion with musicians known to the SoNoRo audience, such as the British pianist Diana Ketler, who is also the artistic director of the festival, the Canadian pianist Louis Lortie, the famous violinist of Romanian origin Mihaela Martin, the Russian violinists Alexander Sitkovetsky and Alina Pogostkina, the Hungarian violinists Katalin Kókas and Barnabás Kelemen, the cellists Frans Helmerson, Marin Cazacu, Kyril Zlotnikov and Justus Grimm, the Italian guitarist Alberto Mesirca or the Argentinian bandoneon player Marcelo Nisinman, as well as a series of musicians who are playing for the first time at the SoNoRo Festival, such as Enrico Pace (piano), Nicolas Dautricourt (violin), Peter Langgartner and Yuval Gotlibovich (viola), Janne Thomsen (flute), Torleif Thendéen (cello).

"The public maybe sees a long list of names that may mean something to some, or it may not, and usually relies on the name of the festival, which credits the musicians invited,when they choose to come to concerts. For Diana Ketler, the artistic director of SoNoRo Festival, and myself, choosing the musicians and the programme is work that takes almost a year, in which strands of personal narrations, which we think intertwine very well with the story we want to tell at every edition, are used to send the message and vibe of the theme around which we gravitate every year. Moreover, the personal relationships and love stories that will be transmitted so beautifully through music, the long friendships between the musicians which makes them work so well together, everything contributes towards creating the harmony necessary for chamber music, a genre of intimacy, of familiarity with others. All these send an energy we hope the audience will receive at the concert and will be recharged by," declares Răzvan Popovic, the executive director of SoNoRo Festival.

This year, SoNoRo Festival is dedicated to Dadaism and aims to pay homage to its creative energy through the theme of the concerts, the unusual musical programme and spaces chosen, which make reference both to Cabaret Voltaire, the place where this art movement first appeared, as well as the Semitic origin of its precursors, many Jewish artists of Romanian origin. An example of this is the concert in "Templul Coral" (the Coral Temple), on Sunday 3 November, a new space introduced this year specifically to emphasise this connection. Another example is the artistic programme of the concert at "Muzeul Național de Artă al României" (The National Museum of Art of Romania), on 8 November, which contains works by Ernest Bloch ("Abodah pentru vioară și pian"/ Abodah for violin and piano), Osvaldo Golijov ("The Dreams and Prayers of Isaac the Blind, muzică klezmer pentru clarinet și cvartet de coarde"/ The Dreams and Prayers of Isaac the Blind, klezmer music for clarinet and string quartet), as well as one of Marcelo Nisinman's compositions (East Tango pentru bandoneon, vioară, clarinet, contrabas și pian/ East Tango for the bandoneon, violin, clarinet, double bass and piano) interpreted by him in person.

Marcelo Nisinman is an Argentinian musician, whose grandparents, Jews of Romanian and Polish origin, emigrated in the 20s to Buenos Aires. There he will become the protégé of Astor Piazzola and is one of the most remarkable bandoneon players of his time. In this edition of the Festival he will play at "Palatul Bragadiru" (Bragadiru Palace), as part of a concert dedicated to the Argentinian tango, DaDaTango.

Barnabás Kelemen and Katalin Kókas form one of the three artist couples that will be present this year on the SoNoRo stages. Katalin Kókas graduated from the Royal Conservatory of Toronto at just 16, thereafter winning numerous prizes, and Barnabás Kelemen received the gold medal in 2002 at the International Violin Competition in Indianapolis, where he received six of the eight prizes. The two are also founders of the prestigious "Festival Academy" in Budapest.

The second musician couple is made up of Mihaela Martin and Frans Helmerson.

Mihaela Martin was winning during the 70s, while our country was at the height of communism, two of the biggest international competitions in the world. For these merits the Romanian press compared her to Nadia Comăneci regarding international success. Her musical journey was well founded from the start: she studied the violin since she was five years old, with her father, and continued with Ştefan Gheorghiu, student of George Enescu and David Oistrah.

The Swedish cellist Frans Helmerson was born in 1945 and started playing the cello when he was eight years old. Sergiu Celibidache and his mentor, Mstislav Rostropovich, had an overwhelming role in his artistic development.

The third couple is made up of Tatiana Samouil and Justus Grimm. Tatiana Samouil's musical genius manifested itself from the age of three, when she started playing the piano, and at five she was discovering the violin. She debuted when she was just nine years old alongside the National Orchestra of Moldova, under her father's baton - the musical conductor Alexandru Samoilă.

Justus Grimm is a friend of the Festival and other SoNoRo projects, being a chamber music enthusiast. He, too, started studying the cello early, at the age of five, under the guidance of his father, and would end up leading several orchestras, having recordings and important collaborations.

"I can't wait for this edition, especially as it represents a special moment for my career. We are three cellists, the others beingFrans Helmersonand Torleif Thedéen, both Swedes. Frans was my teacher and I consider him one of the best in the world and it will be the first time since finishing my studies that we will play together. Torleif was, also, a student of Frans' and, while I was a student in Stockholm, he was starting his career and was our idol. For me this is an important and emotional moment, and with Frans I will play Schubert's "Cvitetul" (The Quintet), one of the masterpieces of classical music," tells the cellist Justus Grimm.

More details about the musicians in this edition of the SoNoRo Festival "DaDa" 2019 can be found through the portraits on the website SoNoRo.

Tickets and passes to the SoNoRo Festival can be purchased through the Eventbook network (https://sonoro.eventbook.ro/), from Humanitas and Cărturești libraries.

The SoNoRo Festival "DaDa" XIV is a cultural project established by the Ministry of Culture and National Identity.

Established in 2006, SoNoRo Festival has brought chamber music at the forefront of Romanian cultural life and has included the Romanian musical scene in a network of European festivals of high rank. Besides the traditional partnerships with festivals in Italy, Latvia, Germany, England, Israel and Japan, SoNoRo has performed in some of the most renowned concert halls in the world, such as Wigmore Hall in London, Konzerthaus in Vienna, YMCA in Jerusalem and Carnegie Hall in New York.

SoNoRo is a member of the European Festivals Association.