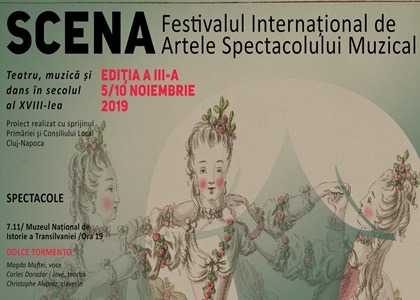 The International Festival of Performing Arts

The SCENA International Festival of Performing Arts, organized by the "Gheorghe Dima" Music Academy Association in collaboration with the INTERART Research and Artistic Creation Center and the Canto and Performing Arts Department of the "Gheorghe Dima" Music Academy, takes place between 5th and 10th of November, its theme being "theatre, music and dance in the 18th century".

The festival originated in the conference which took place on the 17th and 18th of November 2016, celebrating 25 years since the Performing Arts specialization at the "Gheorghe Dima" Music Academy in Cluj-Napoca was added, the only specialization of its kind in the vocational university system in the country.

This year the SCENA festival will start with a symposium on the performing arts of the 18th century. The guests will be: the Italian director and professor Paolo Bosisio, who will give a speech on the Counter-reform of Carlo Gozzi and Mrs. Paola Ranzini, professor of the history of theatre, of text analysis and the practices of performance at the University of Avignon, who will talk about a study on playwrights Marivaux and Goldoni, whose works are performed on stages in Italy.

During the festival there will be three masterclasses: an opera class held by director Paolo Bosisio, a harpsichord class held by Christophe Alvarez and an old dance class held by András and Orsolya Ványolós.

On Friday, 8th of November, the professor and director Paolo Bosisio will award the title Doctor Honoris Causa of the "Gheorghe Dima" Music Academy.

On Friday at 5 pm there will be a round table on the subject of contemporary perspectives on directing musical theatre where the coordinators of the opera courses at the "Gheorghe Dima" Music Academy will participate: conf.univ.dr. Ina Hudea, lect.univ.dr. Tiberius Simu and asist.drd. Mihaela Bogdan. The moderator will be prof.univ.dr. Anca Mihuț.

On Saturday, 9th of November, at 5 pm at the Book Corner Librarium bookshop on the Eroilor Boulevard nr. 15 there will be a book release, The Evolution of the Opera Performance - from the scenographic miracles to staging in the 18th century (Eikon Publishing House, 2018) by lect. univ. dr. Dianei Todea-Sahlean, professor at the Babeș-Bolyai University.

There will be concerts and shows in the evening during the whole festival.

On Friday, 8th of November, at 7 pm at the concert studio of the National Music Academy, on Ion I.C. Brătianu Street nr. 25 the "De la soare la răcori" show will take place, the performance will be by the Icoane ensemble lead by prof.univ.dr. Ioan Bocșa. The Icoane ensemble is a special guest at the SCENA festival this year. The ensemble changed its structure by introducing traditional music, dance and performance.

On Saturday, 9th of November, at 7 pm at the concert studio of the National Music Academy, the "A century of gallantry" dance show-workshop will take place, coordinated by conf.univ. dr. Nicoleta Demian who created the choreography to J.Ph. Rameau's Entrée des fleurs (from Les Indes Galantes). The protagonists of this show-workshop will be the students of the Performing Arts Department.

On Sunday at 11 am at the concert studio the workshop of the old dance masterclass held by Vanyolos András and Orsolya will take place.

On Sunday at 7 pm at the concert studio of the National Music Academy, the SCENA Festival Award Gala will take place where the best shows done by the students of the Performing Arts Department in 2017 and 2018 will be awarded.

The Gala will be followed by an exceptional event. For the first time after 365 years a piece of the ballet called Ballet du Temps, composed by Jean Baptiste Boëset, Jean Baptiste Lully, Louis de Mollier will be performed on a libretto by Isaac de Bensérade. The fragment which will be shown to the public on Sunday, November 10th, has been restored based on the manuscript by the pianist, harpsichord player, composer and director Chrisophe Alvarez and it has been recently recorded in Montréal, Canada. The restored fragment of music inspired a dance workshop called The Time of Ballet - The Ballet of Time coordinated by conf.univ.dr. Livia Gună, former prima ballerina of the National Opera in Cluj and currently the ballet master at the Hungarian Opera in Cluj.

On the frontispiece of the manuscript it is written that this ballet was performed by King Louis XIV on the last day of November in 1654, on the 30th of November, and it was performed again on the 3rd of December. Close to these dates, 365 years later, students of the Performing Arts Department and dancers at the Hungarian Opera will perform during the show-workshop, directed and choreographed by Livia Gună.

The detailed schedule of the festival: https://www.amgd.ro/Festivaluri/

Project by the city hall and local council of Cluj-Napoca