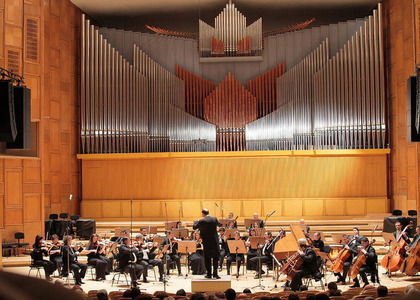 For the first time in Romania: “Messa di Gloria” by Rossini, at Sala Radio

ROSSINI, a genius of Italian opera, penned no less than 39 lyrical works - such as The Barber of Seville or Cinderella - at 12 he was composing his first opera and at 18 he was assisting with the first performance of a work penned by him. Besides the operas that made him famous, Rossini also composed some scores of sacred music.

Wednesday, 13 November (19:00), at Sala Radio, Radio Chamber Orchestra presents, for the first time in Romania, Messa di Gloria by Rossini, under the baton of the conductor of Lebanese origins TOUFIC MAATOUK, appreciated for his take on the monumental repertoire of this kind. In 2015, he debuted as conductor in one of the most well-known concert halls in the world - Carnegie Hall, New York - with Messa di Gloria by Puccini, followed by the debut (in 2016) at Teatro San Carlo in Naples with Requiem by Mozart.

Composed by Rossini during a period when he was enjoying great success thanks to his operas, Messa di Gloriawas performed for the first time in 1820, in San Ferdinando church in Naples. The concert at Sala Radio includes overtures as well as famous arias penned by the genius MOZART, taken from operas such as The Marriage of Figaro or Cosi fan tutte.

The event will take place with the participation of the Radio Academic Choir, conducted by CiprianȚuțu. The special guests of the evening will be the singers ELENA MONTI (soprano), ANTONELA BÂRNAT (mezzo-soprano), JUAN DE DIOS MATEOS (tenor), STEFAN von KORCH (tenor) and CĂTĂLIN TOROPOC (bass).