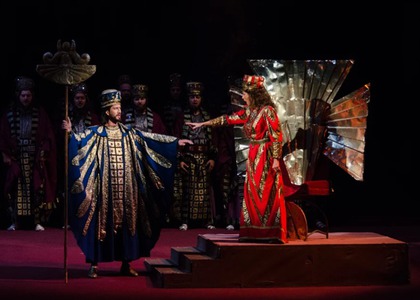 Dragana Radakovic, invited at the“Nabucco” show held on the stage of the Bucharest National Opera

On Friday, the 8th of November 2019, at 6:30 p.m., Bucharest National Opera presents the "Nabucco" show by Giuseppe Verdi, directed by Hero Lupesco, with Goerge Doroșenco's scenography, Doina Andronache's choreography, Cristina Costescu being thedirecting assistant and Daniel Jinga - the choirmaster. The conductor will be the maestro Mihnea Ignat, a guest.

"Nabucco" show by Giuseppe Verdi is one of the longest-living creations in the history of the Bucharest National Opera. For this production, the late director Hero Lupescu, one of the most appreciated performance creators in the history of Romanian musical theatre, used to work with large ensembles, succeeded in providing a remarkable personality to the chorus, turning it into a single character, just like his role in antique theatre was perceived. Thus, the chorus, or the voice of an enslaved people, simultaneously performs the same moves, just like a single human being, has the same aspirations and feelings as a distinct personality. On the other side, the soloists, as representatives of the ideas the opera conveys, are, most of the time, static, just like some imposing statues or some declaiming masks, just like some machines that have the ability to feel something. The scenography created by George Doroșenco, even if it's made of simple but huge decorative elements, expresses the megalomania of the protagonist, the dreaded king Nabucodonosor. The premiere on the Bucharest stage was in October 1987, and it represented a revolutionary act of the artists of that time, and it succeeded in traveling through time and remaining in the repertory for 30 years.

"Born under a favorable star, just like the composer himself considered it, "Nabucodonosor" by Giuseppe Verdi, composed to a libretto by Temistocle Solera, isn't intended for success, but for enthusiasm. The first Verdi'smasterpiece arouses more and more attention lately - a mix of grandeur and pathos, of pride, hatred, anger, cruelty, and fatality, with its excess of threatening rhythms, with its brass instruments being by turn heraldic, warlike, funereal, with its unequaled choruses, with its venturing, full of drama arrays, with its spectacular moments. After a period of absence from the lyrical stages, Nabucco, once again, raises passions, performed in jam-packed halls. An extra ticket means a terrific success: at least, this is the atmosphere that surrounds the show held at the Bucharest National Opera,directed by Hero Lupesco. A classic "Nabucco" which is not as bold as the one in Cluj-Napoca, from the theatrical point of view - the drama of the effects, of the images and the monumentality of certain details. The hieratic setting suggested by the biblical theme, which became a parable of liberty since the very day of the premiere (9th of March 1842, at La Scala), is characterized as having grandeur and tensions, mythological thrill and precognition, harshness and vanity, a tone of sovereign austerity, all of these dosed in the right proportion, in order not to stifle the drama, thus shaping the importance of portraiture. If Nabucco doesn't excel in psychological motivation (the protagonist's evolution, the conquering king of Babylon, from fanatic cruelty to the pacifist state, is conventionally argued from the lyrical point of view), it depicts the passion-driven heroes, the strong personalities, just as if they'd been made up of broken lines. These are especially characterized by dramatic effects, "incandescent" ones, theatrical characteristics completing the music pathos." - Costin Tuchilă, "România literară"

The tickets can be bought on http://tickets.operanb.ro and at the ticket office of the Bucharest National Opera House (working hours: Monday-Sunday, 10 a.m-1 p.m and 2 p.m-7 p.m).