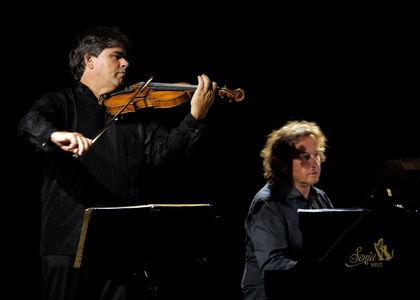 "Enescu`s violin"tour has returned on Romanian stages this fall, an extraordinary concert performed by Gabriel Croitoru and Horia Mihail at Brașov, Patria Hall on November 15, 2019

Gabriel Croitoru, the violinist with the privilege to play the Guarneri del Gesu violin, surnamed "The Cathedral", the one that George Enescu played (an instrument belonging to the patrimony of "George Enescu" National Museum and provided by this institution) and the pianist Horia Mihail, performed recitals on 11 stages throughout the country this fall, with three sonatas that are representative for the violin and piano repertory of Claude Debussy, Richard Strauss and Cesar Franck.

Gabriel Croitoru:" This is the eighth year we organize the "Enescu`s violin" tour and what this moment mainly stands for in our point of view, the protagonists of this cultural project, is the idea of continuing to promote the culture, music and tradition, an endeavor once initiated by the great Master George Enescu. I truly believe that the sound of this violin could fit anywhere. The audience becomes part of the artistic act on an emotional level, breathing life into it, as a result of the way the instruments share the spirit of the people who play them. The fact that this tour has survived for so many editions makes it an important feature of our lives, and when something becomes essential in your life, you cannot possibly think of it as a hard thing to do. It`s quite the contrary. We have grown fond of one another, the instruments we play, as well as the audience from the cities we visit. The joy of seeing each other again is equally great for all parts. I couldn`t say if our music has the power to heal, but it does bring a splash of colour, a chance to breath and reflect in the lives of the people coming to listen to us."

Since 2012, along with the Guarneri del Gesu violin that belonged to George Enescu, in a modern manner, Gabriel Croitoru has resumed the mission that George Enescu took on when he was travelling across the country during the World War I in order to sing for those who were ill, wounded in battle, people in misery. Gabriel Croitoru is the violinist who won, by contest, the right to play "The Catheral", the famous violin made by the great Guarneri del Gesu, and now, alongside pianist Horia Mihail andthrough the sound of this unique instrument, he is taking his music to the places where it`s needed the most.

From 2012 until 2019, the travelling history of Enescu`s violin is particularly diverse. While on the first editions of the tour we were exploring the untouched territory of the community theaters from villages at the far ends of Romania, where the sound of the Great Music was completely unknown, or the one of high school gymnasiums full of curious young students who wanted to hear the sound of a famous violin, in a place where they would do their sports classes, later on there were tours where it would follow the "wandering pianos" left behind by Horia Mihail, at different cities in the country and obviously, the Radio Hall, but there were also years when it played in Beijing, London, Spain, Portugal and the list could go on.

The tour repertory sometimes consisted of iconic sonatas form the violin repertory, which the public received with a sense of respect turning into rounds of enthusiastic applause by the end of the performance. On other occasions, the two artists would perform a series of miniatures demonstrating the virtuous repertory of the violin. All of them were touching the heart of the audience through the talent of Gabriel Croitoru.

Throughout these 8 years, unremittingly, Gabriel Croitoru and Horia Mihail, two Romanian musicians full of enthusiasm and familiar with the experience of playing in big cities on stages such as Radio Hall or Romanian Athenaeum at Bucharest, but also in smaller cities of the country, discovered that they have the power to carry on the legacy of the classical music and take it to the most different places, as music itself has a beneficial power, following Enescu`s journey and picking up where he left off, more than a century ago. This being the story of how the "Enescu`s violin" came to life, the most important thing is that this tour is now experiencing its 8th edition without interruption and that this year it has taken Gabriel Croitoru and the Guarneri del Gesu violin, "The Cathedral", alongside pianist Horia Mihail to Slatina, Pitești, Caracal, Bârlad, Bistrița, Timișoara, Deva, Ploiești and of course, Bucharest, at Teatrelli Hall and Radio Hall.

Cesar Franck: Sonata in D major for violin and piano