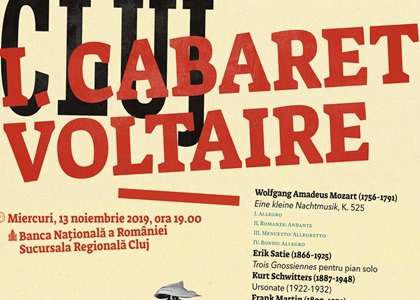 The SoNoRo XIV DaDa festival arrives in Cluj-Napoca, from November 13 to 17, 2019

This week, the SoNoRo DaDa Festival will be present in Cluj-Napoca, and the opening concert will be held on Wednesday, November 13, 2019, at the National Bank of Romania - Cluj Branch. For five days, the people of Cluj are invited to six captivating concerts, held by 11 renowned musicians.

On the first evening, the public is invited to the VOLTAIRECABARET CONCERT, on Wednesday, November 13, from 7:00 pm, in a place with tradition for the festival, The National Bank of Romania - Cluj Branch. The concert named after the place where Dadaism was born will have both a classical program, with works by Mozart or Shostakovich, as well as a Dadaist one, which will include Erik Satie and Arnold Schönberg, one of the most influential composers of the twentieth century. Also on Wednesday's program, audiences will listen to Kurt Schwitters' famous "Ursonate" performance, a truly Dadaist experience. Guitarist Alberto Mesirca, nominated for "Best Solo Performance" at the 2012 Grammy Awards in Los Angeles, will perform a work by Frank Martin.

On Thursday, November 14, from 7:00 pm, music lovers are invited to the Boema House to attend the SOAP OPERA concert, a suggestive title, inspired by the Swiss soap Dada from Dadaist history. The musical puzzle will contain an exciting work by Gluck, a musical cocktail by the great Paganini, the work "Passacaglia" composed by the Norwegian Halvorsen, but also the popular suite by Manuel de Falla and the tango music by Astor Piazzolla.

On Friday, November 15, the festival proposes to lovers of classical music a meeting in a new space for the festival, at the House of Religious Freedom. In the former residence of the Unitarian bishops and the current cultural center, the concert DA, DAAA!!! will take place, with the music of the great composers Beethoven, Kodály and Shostakovich.

On the evening of November 16, at 7:00 pm, the SONGS AND DANCES OF LIFE concert is scheduled, with free admission, at The Calvinist Church. The church was built in 1902, in English Gothic style and is considered a unique monument due to its age and size, being the largest hall-type Gothic construction in Transylvania and South-East Europe. The repertoire will contain works by Pablo Casals, Benjamin Britten and Mendelssohn-Bartholdy.

The last day of the SoNoRo Festival marks the end of this edition with two concerts. MATINÉE takes place on Sunday, November 17, at 11.00 am, in a location hosting the festival for the first time, the Sigismund Toduță Memorial House, and the closing concert, FINALE: FROM DAWN TILL DUSK, will take place in the evening, starting at 7:00 pm, in a location where the festival has been coming back for several years, the Maximum Auditorium Hall at Babeș-Bolyai University.

Sigismund Toduță Memorial House, the place where the composer from Cluj had lived for 30 years, is yet another location introduced in the SoNoRo circuit. Here the audience will listen to the music of Mozart, Mikhail Glinka, Erik Satie and Jean-Marie Leclair.

At the final concert at Babes-Bolyai University, "Octet in E-flat major, Op. 20", one of the most important works of Mendelssohn-Bartholdy, and "Piano Trio in A minor, Op. 50, In Memory of a Great Artist", an exciting work composed by Tchaikovsky, will be performed. Part of the proceeds from this concert will be directed to the campaign to support young people who have struggled with drug addiction and have been detoxifying. The Lions Clubs have developed a project to set up and operate a Rehabilitation Center after the treatment of addiction, which will also have the role of specializing the staff in addiction therapy.

On November 17, the SoNoRo Festival reaches the end of the 14th edition, entitled DaDa, after 10 concerts and a party in Bucharest, three concerts and a collage workshop in Sibiu and the six concerts in Cluj-Napoca.

Artistic director Diana Ketler and executive director Răzvan Popovici have already announced the theme of the 15th edition in 2020: the SoNoRo Festival will be called "The Master Bird".