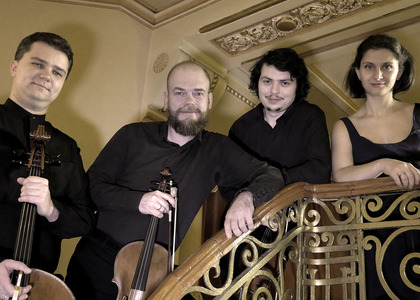 The National Center of Arts "Tinerimea Română" invites the audience to the "Tinerimea Română" Palace on Saturday, December 7, 2019, 5 p.m. for the recital of the Arcadia Quartet, whose members are Ana Török - violin, RăsvanDumitru - violin, Traian Boală - viola and Zsolt Török - violoncello.The recital is called "Drama per musica" and it consists of W.A.Mozart - The Adagio and Fugue in C minor, K. 546, B. Bartók - The String Quartet No. 6, Sz. 114,andJ. Brahms - String Quartet No. 2 in A minor.

Being the most well-known quartet from the young generation, Arcadia is a constant presence at the most important chamber music events in Europe, not only for the its valuable members, but also for the captivating manner in which they give life to the performance, which is always reaching for the highest peaks of artistic virtue.

"Drama per musica" will lead the audience through three stories from different times, with a sound shaped by the style and virtue of Arcadia quartet.