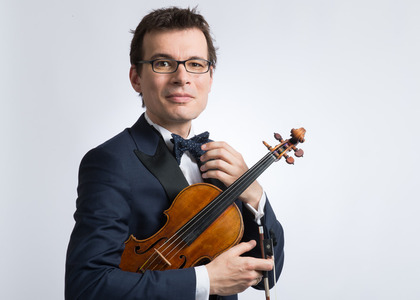 Launched in 1999 as a cultural space oriented towards the connection which must be made between the personality of the most important Romanian composer, George Enescu and the young generation of artists, the "Remember Enescu" Cultural Foundation, run by the Violinist Alexandru Tomescu and the Master's mother, the violin professor, Mrs. Mihaela Tomescu, proposed to honor in various forms the personality of the great composer, violinist, conductor, pianist and professor, George Enescu, emblematic figure of the Romanian culture and, at the same time, to support the development of the musical activity in Romania.

The professor Mihaela Tomescu, founder, says that "The Cultural Foundation "Remember Enescu" has members who are soloists and professors who deal with the salvation and protection of the musical art treasure which Romanian people holds, as well as the promotion of the young people in the musical life, including through the encouragement to approach the Romanian creation consistently. Our projects oriented towards the connection which must be made between the personality of the most important Romanian composer, George Enescu, and the young generation of artists, but also towards the keeping in the public's memory of some eminent professors who influenced through their action the quality of the Romanian musical life."

For 20 years, the Foundation has been developing a very important series of projects for the Romanian musical life and, specifically, offers the possibility of improvement in classical music of the young musicians. Hundreds of young artists, members of the "Remember Enescu" Foundation participated to contest of interpretation like:

- The International Remember Enescu violin contest , which takes place every two years at the George Enescu Memorial House in Sinaia;

- "Remember Enescu" Traveling Season takes place annually since the establishment of the Foundation, from 1999, between September and June contains, on average, 60 events. The public from București, Ploiești, Sinaia, Tulcea, Mogoșoaia, Brașov, Brăila, Cluj Napoca, Sibiu, Piatra Neamț, Bușteni, Buzău, Satu Mare, Alba Iulia, Iași and others can assist to the recitals in which members of our foundation together with pupils and students from the city-home are invited to perform in front of the public.

The "Remember Enescu" Cultural Foundation organised, over time, master classes with international artistic personalities Arlette Bonamy - Franta, Conrad Chow - USA, Alexander Arenkow - Austria, Semion Yaroshevich - Israel, Monte Belknap - USA, Eduard Schmieder - S.U.A and in partnership with the Ministry for Romanians Abroad. Starting from 2013 violin and viola Maserclasses are organised for the young musicians in Diaspora and from 2014 these courses of artistic mastery take place at Mihăileni/Botoșani - the maestro George Enescu's house and addresses to the young people in the area. The courses are held by the violinist Alexandru Tomescu, the violist Cristian Andris, Mrs Professor Mihaela Tomescu and the Marketing specialist, Anca Gheorghe.

Alexandru Tomescu says "It s a great pleasure to have the opportunity to celebrate 20 years of uninterrupted activity of the Remember Enescu Cultural Foundation in this architectural jewelry of the capital- the Odeon Theatre. We wanted to reunite on the stage the members from the debut years of the Foundation which registered already notable successes in theor careers as well as children who have just joined us. Together- we will celebrate through music these first 20 years!"

This year, the "Remember Enescu" Culural Foundation celebrates 20 years of Excellence in classical music and together with the Odeon Theater will be held on 19th december 19 o'clock on the stage of the Odeon Theater, an extraordinary concert by the Violinist Alexandru Tomescu and the Stradivarius Violin Elder-Voicu, next to the pianist Sinziana Mircea, the soprano Laura Tatulescu, but also the piano and harp interpreters Maria Ecaterina Blejan and Ioan Theodor Blejan and the young pianist Eva Garet, make from this event something special. These ones will interpet works by George Enescu, Mihail Jora, Frederic Chopin, Franz Liszt, Piotr Ilici Ceaikovski and others.

The actor Cristian Șofron, the General Director of the Odeon Theater says " The Odeon Theater proposes to make all of its activities at a level of excellence. This event is also one of them. I wish that this collaboration with the great Alexandru Tomescu and the "Remember Enescu" Foundation would develop and make together a lot of this kind of events at the highest level."

You are welcome at Odeon Theater!

The tickets can be bought online, until 15 december, from the Odeon Theater site www.teatrul-odeon.ro and from the ticket office until the day of the event.

The partners of the event are: the Odeon Theater- the Bucharest cityhall, Aectra Agrochemicals SRL and Radio Romania Musical.

The event is organised by the "Remember Enescu" Cultural Foundation and the Odeon Theater.