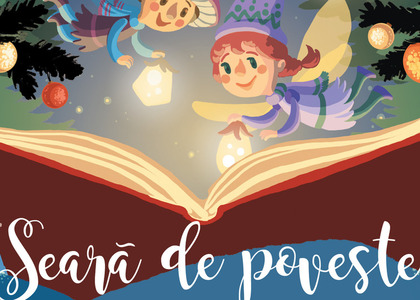 On Friday, 13 December 2019, children, parents and grandparents are invited to spend a Fairy Tale Evening in the heart of Bucharest, the ARCUB auditorium. The story of the most loved Christmas carols of the world will be interpreted by the Bravissimo Choir and narrated by the actors Cristina Deleanu and Eugen Cristea. This children's event is both educational and charitable, being organized by the Princess Margareta of Romania Foundation with Christmas only a step away, meant to raise the necessary funds for supporting children's education in rural areas.

The stories behind Silent Night, Jingle Bells, Rudolph, Adeste Fideles or La Vitleem colo-n jos are part of the musical repertoire of the evening, played by the spectacular group of kids from the Bravissimo Choir, winner of the TV-show Next Star, conducted by Elena Radu. Two beloved actors of the Romanian theatre will unravel the legends and customs born from these carols. Seasonal gifts can be bought for charity during the event, in limited edition, such as kaleidoscopes, mugs, badges or themed books for children.

You can attend the event by making a reservation on www.eventbook.ro. Every ticket amounts to a donation to the national programme Investing in Rural Areas. The public's generosity will be repaid with magical moments.

The show is recommended to children over 5 years old.