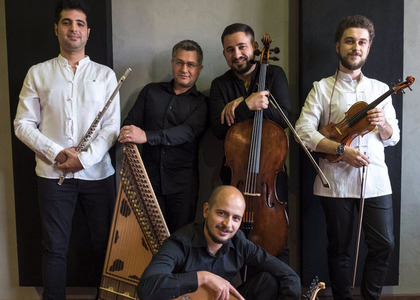 Prince Cantemir's music will be interpreted by the chamber Ensemble of traditional music Anton Pann for the European audience, during the Europalia Festival Romania, with the occasion of a unique tour - "Cantemir Melo by Anton Pann Ensemble". The concertos will take place during 13-15 December 2019, as follows: Friday, 13 December, 8 p.m., at De Centrale, in Ghent( Belgium), Saturday, 14 December, 8 p.m., at Le Phnix Valenciennes (France), and Sunday, 15 December, 7.30 p.m., at Salle Breughel Vieux, Genappe (Belgium). Photocopies of Dimitrie Cantemir's manuscripts will be used to interpret the musical pieces, as well as the transposition variants from the prince's musical transcripts. The instruments used are the oud, kanun, dayereh, bansuri, duduk, but also instruments specific to chamber orchestras the violin, cello and flute.

The musical compositions carrying Prince Dimitrie Cantemirs signature were recorded in their entirety, for the first time in Romania, by the Anton Pann Traditional Music Ensemble. The result was the double CD, Cantemir Melo, launched as a first edition at the end of 2018.For the first time in Romania, the entirety of pieces proven to have been composed by Prince Dimitrie Cantemir is being recorded. Like in all our projects, we blended our exhaustive work of documentation and research of the manuscripts, to put all the historical pieces together, with the challenge and joy of reproducing the sound of the 18th century for the public, sounds we will bring to life on stage", says Constantin Rileanu, PhD in music and theology, producer of the project and coordinator of the Anton Pann Traditional Music Ensemble.

It is an honour and a responsibility to be part of this festivals lineup as cultural representatives of our country. The Anton Pann Traditional Music Ensemble taking part in EUROPALIA Festival Romania is a testimony to the group's gradual artistic evolution, and the perfect opportunity to initiate an intercultural dialogue at a grand scale. We now have the opportunity to support and enrich the cultural initiatives of the Romanian Cultural Institute outside the borders through our participation, says Constantin Rileanu. The coordinator of the ensemble founded in 2004 adds: A great number of projects were presented for the concerto series of EUROPALIA Festival Romania, but the chosen one was Cantemir Melo - a project of revival, with the help of the Romanian artistic vision, of the musical works belonging to the Moldavian prince Dimitrie Cantemir. The programme will include a selection of works belonging to this sophisticated intellectual, and act as a gate to our intellectual past from the first half of the 18th century. By doing so, the public will be able to have a more accurate view of our country.

The Anton Pann Ensemble's music comes from medieval manuscripts, the libraries of places of worship, but also some codices and collections of well-known composers, such as Ioan Cianu, Dimitrie Cantemir, Petros Peloponesios, Anton Pann, I.G. Zographou Keibeli or George Ucenescu.

From previous experiences, I have noticed the European publics positive response upon hearing the richness of sounds we Romanians have to offer, as well as the intellectual musical exoticism they had not experienced up until then. Unfortunately, there is a tendency to have misconceptions and form judgements too early, a tendency we tried to counter with our representations beyond the borders, but we hope to achieve a higher level of attention and interest. We have faith that the European public will receive the traditional Romanian music with the same open arms they receive well-established musical compositions from around the world, thinks Rileanu.

Anton Pann Traditional Music Ensembles coordinator blends music with imagery specific to our country: "The collaboration with the National Art Museum of Romania made it possible for us to use iconic images of the visual artistic creations specific to traditional Romanian culture and project them during our concertos, providing an easy way of accessing the cultural information our ensemble will present during its three representations. The images are diverse and specific to the Romanian and Southeastern Europe cultural profile. "

The Anton Pann Ensemble came to life in 2004 and attracted young musicians, graduates from the National University of Music. Aiming to create the best possible experience for the public, the Anton Pann concertos are often accompanied by video projections, light work, acting scenes. Some concertos can even include famous international musicians or mash-ups of traditional music with electro or jazz.

Dimitrie Cantemir (1673-1723), beyond his political, philosophical, theological, geographical and literary activities, was the most prominent figure of musical culture in the Southeast area of Europe and of the Ottoman Empire from the 17th to the 18th century. Being a polymath and a polyglot, he creates the first scientific treatise of secular music of his time and leaves to posterity the richest collection of musical works (365 pieces, out of which 20 are his compositions). Besides his impressive collection, Cantemir offers relevant information about style, compositional act, interpretation and principles of musical modes from his time and from times passed.

EUROPALIA International Arts Festival is seen as the greatest cultural manifestation in Belgium, being organized under the patronage of the Royal Family of Belgium every two years, in Belgium and the neighbouring countries France, the Netherlands, Luxembourg, Germany or Great Britain. Romanias participation at the 27th edition of the EUROPALIA Festival is coordinated by the Romanian Cultural Institute, a major project during October 2019 February 2020, implemented in collaboration with the Ministry of Foreign Affairs, the Ministry of Culture and National Identity and the General Secretariat of the Government, together with the EUROPALIA International Association, the long-established organizer of the event.The 27th edition of the EUROPALIA Festival is dedicated to Romania.