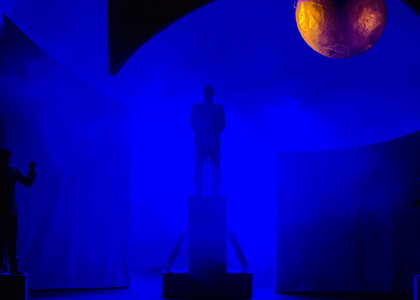 Bucharest National Opera Housepresents on Sunday, 12th January 2020, at 6:30 p.m. the"Don Giovanni" by Wolfgang Amadeus Mozart performance. The director is Andei Tabacaru-Hogea, the set designing and the video effects were conceived by Anca Albani, the choreography was created by Mălina Andrei, and the video and lighting design by Gabriel Kosuth. The chorus master is Daniel Jinga and the conductor's role will be played by maestro Vlad Conta.

Anda Tabacaru-Hogea, about the"Don Giovanni" performance on the stage of Bucharest National Opera House: "Don Giovanni lives the moment excessively and in a total freedom of expression: from erotic violence to charming tenderness, from a spontaneous humour to demonic cynicism. Every scene and each of his arias is an amazing energy outburst that exceeds the limits of reality. Even from the first chords of the overture we are presented with the hero's confrontation with the metaphysical, with the soul and eye of a spirit of justice that watches, sees and accuses all of Don Giovanni's excesses. The eye of the world, the omnipresent eye of God, the eye of his own conscience wants his return to rules and principles. The hero's freedom of expression is not wanted. This is what makes that extraordinary fight emerge, full of voluptuousness, energy and mystery."

The legend of Don Juan has inspired great authors throughout time, from Tirso de Molina, Molière, E.T.A. Hoffmann, George Gordon Byron, Alexandr Puşkin, George Bernard Shaw and Albert Camus, being the starting point of some essays, plays, poems. Out of all, Mozart's opera remainsintangible, fresh at eachenactment, as ifthetireless Don Juan himself had inoculated it with his energy. An opera about seduction, about the relationship between ethic and aesthetic, about the force of desire and beauty.