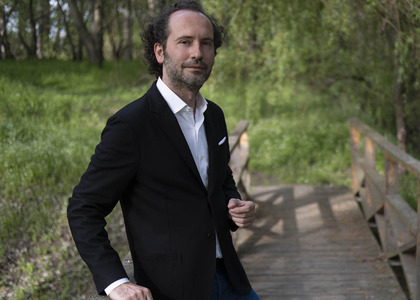 The SoNoRo Concerts at the International Festival EUROPALIA ROMANIA

After the International Arts Festival's thundering opening called EUROPALIA ROMANIA, SoNoRo returns with the Concerts SoNoRo tour on the 1st of October in Bruxelles. The tour is composed of two concerts and a series of masterclasses which will take place between 8-10th January 2020 in Hague and Antwerp.

The opening concert in Bruxelles, performed in the presence of the members of Belgium Royal Court, opened the gates of the biannual festival called Europalia, where Romania is invited.

We chose again "Romanian Rhapsody" as a representative piece and we were very happy to receive such an enthusiastic final round of applause coming from a public truly enthralled by the ingenious mind of George Enescuc, capable of capturing the spirit of Romanian music. The SoNoRo concert also opened the"Brâncuși. Sublimation of Form" exhibit, which remains opened at Bozar until the 2nd of February 2020. We therefore found ourselves standing amongst some of the titans of Romanian culture and feeling very proud of our cultural legacy.

We are very happy to star the year with a bang by returning toEuropalia,in January with the "SoNoRo Concerts" tour. It is a very important year for the SoNoRo Festival because this is the year in which we will be celebrating the XVth edition of the festival, entitled "Pasărea Măiastră"; the festival willbegin on the30th of October in Bucharestandend in December in Carnegie Hall, New York. Wewillonceagainletourselvesbeinspired by thegeniusminds of Enescu and Brâncuși and we hope to offer the best edition yet, a proper celebration for such an important anniversary, explains Răzvan Popovici, the director of SoNoRo, the International Festival of Chamber Music.

The SoNoRo musicians who will participate at the SoNoRo concerts in January 2020 are violinists Mihaela Martin, Alexander Sitkovetsky, Alissa Margulis, Tatiana Samouil, violists Vladimir Mendelssohn and Răzvan Popovici, cellists Justus Grimm and KyrillZlotnikov and pianist Diana Ketler, esteemed soloists of the great stages of the world and professors at some of the most important European musical institutes.

The SoNoRo Concerts, played by the SoNoRo ensemble at the Arts Festival Europalia Romania, will take place in Antwerp and Hague, as stated in the following programm:

deSingelis one of the most important cultural centres in Belgium and it is the place where the programmes of the Royal Conservatory in Antwerp, the Flemish Architectural Institute and the Flemish Centre form Musical Study take place.

NieuweKerk was one of the first protestant churches in Hague, built in 1649. In the 20th century, after a series of restoration projects, was reopened to the public, becoming one of the most appreciated and exclusive concert halls in the Dutch city.

The musical program lists as follows:

George Enescu - Romanian Rhapsody No. 1, with an arrangement for a piano quartet by Thomas Wally

George Enescu -The Octet for Strings in C major, Op. 7

The EUROPALIAFestival is one of the most important international arts festivals, a major cultural manifestation organised once every two years under the Belgian Royal Family patronage, in Belgium and its neighbouring countries -France, Holland, Luxembourg and Germany or Great Britain.

The Romanian Cultural Instituteis the coordinator of the Art Festival EUROPALIA ROMANIAwhich takes place between October 2019 and February 2020 and it has been created in collaboration with the Ministry of Foreign Affairs, the Ministry of Culture and National Identity and the Government's General Secretary along withEUROPALIA International, the event's organiser. The festival encompasses event in the realm of visual arts, performing arts, music, cinema, literature, cultural education.

For more details go to: www.europalia.eu.