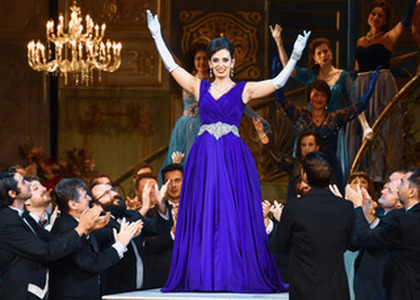 "La Traviata", at the beginning of the year on the stage of the Bucharest National Opera

The Bucharest National Opera presents on Friday, January 24, 2020, starting at 6.30 pm, the performance "La Traviata" by Giuseppe Verdi, Paul Curran being responsible for the staging and musical setting . Master Ciprian Teodorașcu will be at the conductor's podium.

The show brings to the public's attention the moving story of a courtesan who lived in Paris in the first half of the 19th century under the name of Marie Duplessis and who marked the existence of artists such as the composer Franz Liszt and the writer Alexandre Dumas-filul. The latter, as a posthumous tribute, chose her as a muse for his famous novel "The Lady of the Camellias", which served Giuseppe Verdi as the inspiration for his work, "La Traviata", whose first representation at Bucharest took place in 1856, a few years after the world premiere at La Fenice Theater in Venice.

The director Paul Curran proposes an unconventional and provocative editing that transposes the action of the story of Paris in the 1700s, as it appears in the booklet of the opera. The directorial concept follows the key details of the story "La Traviata", especially the contrast between apparent conservatism and tacit pomposity, which gives it dramatic flavor.

Director Paul Curran about "La Traviata" on the scene of the Bucharest National Opera: "I think, for that time, Verdi was writing a modern opera. The theme of the opera was very popular at the time, but at the same time, dangerous. In other words ,drama consists in a story that each of us can understand, it's the story of a woman in disgrace. Do you think this whole story has a chance of happening in reality? Of course. Should a woman be put in a situation so awful because of society? I don't think so. But this is exactly what makes it so interesting to me and especially we can all find something in it from ourselves, we can find something similar in us from certain fragments of the La Traviata."

"Classical and modern in a remarkable scenography. The setting and costumes impress from the first frame with drawings that give balance to the scenic plateau, imagined in the background of Parisian locations from the beginning of the 20th century, with much baroque, but also with" art nouveau ". The action takes place at the end of the 1950s. The eclecticism of the association of ideas is sustained and liked." - Costin Popa