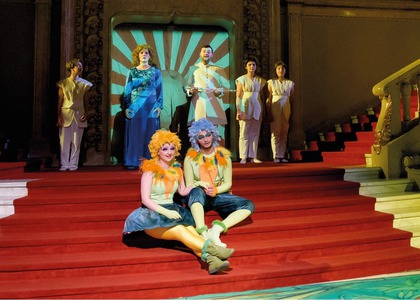 The "Ludovic Spiess" Experimental Studio in the Arts of the Musical Performance within the Bucharest National Opera House presents on Sunday, January 26th, 2020, starting at 11 AM the "Magic Flute" show by W.A.Mozart.

The directors of the show -Anda Tabacaru, director Smaranda Morgovan, musical director, Adriana Urmuzescu scenographer- invite the wee spectators into a colorful, fascinating universe with characters that they will most certainly love. Mozart's enchanting music, the songs characterized by inspiration will accompany him in this wonderful story - Anatol Rogut on the piano, Nicoleta Amzulescu , at the flute, Maria Paladi on the celestial harp. The participation of the children's choir of the Bucharest National Opera House will bring the novel in the performance of the action, permanently accompanying the characters of the opera - stage movement by Ileana Sora.

The Mozartian masterpiece was adapted for children, the subject of the work being interpreted, due to its originality and charming music, as a fairy tale in which truths and lies, courage and cowardice, Darkness and Light, friendship and betrayal are facing each other.

The "Magic Flute" two-acts masterpiece had its premiere in Vienna, at the Freihaustheater, a popular theater, in 1791. Emanuel Schikaneder's libretto was inspired by the story "Lulu" by Liebeskind, published in the Dschinnistan Oriental Stories collection in 1786. The work is considered the best creation of the singspiel genre, a comic opera of German origin that instead of recitative (sung dialogue) uses the spoken dialogue. The "Magic Flute" is one of the most appreciated and sung works in the world. The first installation was directed and conducted by the composer himself and was of resounding success. The author of the libretto was the interpreter of the role of Papageno. In 1792, one year after the absolute premiere, but also since Mozart's death, 100 performances were already celebrated.

Tickets can be found at http://tickets.operanb.ro/and at the ticket office of the Bucharest National Opera House (schedule Monday - Sunday between 10 AM - 1 PM and 2 PM - 7 PM).