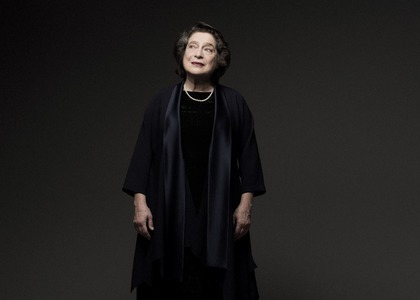 The "Beethoven 250" program from the "George Enescu" Philharmonic continues this week, Thursday and Friday, 6thand 7thFebruary2020, with an exceptional concert led by master Horia Andreescu. Pianist Elisabeth Leonskaja is the singer invited to perform Concerto No. 2, in B-flat major, for piano and orchestra, op. 19 of the great German composer. Elisabeth Leonskaja, who has been one of the most famous pianists of our age for several decades, has been described as the "piano lioness","la dernièregrande Dame de l'Ecole Soviétique" or "Anti-Diva". "In addition to self-improvement, fastidiousness, passion and intelligence, the artist ranks among the best, not only from these days but from all times: alongside a Clara Haskil or a Lipatti, having modernity on her side," the music magazine "Diapason" (Paris) wrote. Elisabeth Leonskaja faithfully served music in the spirit of the tradition of great Soviet musicians like David Oistrah, Sviatoslav Richter and Emil Gilels, who considered respecting the quintessence of musicfirst, even though they worked in a very difficultpoliticalclimate. His almost legendary modesty exacerbates her shyness, but as soon as he enters the stage, the audience perceives the force that has permanently supported her in her devotion to music.

The Symphony Orchestra of the Philharmonic "George Enescu" will also have in the program, on Thursday and Friday in the Great Hall of the Romanian Athenaeum, The Egmont Overture and Symphony No. 4, in B-flat major, op. 60 by Ludwig van Beethoven. On the 250th anniversary of his birth, the German composer, born in December 1770 in Bonn, is celebrated worldwide. Ludwig van Beethoven (1770-1827) was the founder of a new era in music, his creations being a bridge between classicism and romance. In 2020, "Beethoven year", the Philharmonic "George Enescu" dedicates numerous concerts to the immortal creator.

For reservations please visit the www.fge.org.ro

Horia Andreescu has maintained a special relationship with the "George Enescu" Philharmonic since his debut in 1987. Until 2010, for more than 18 years, he was the artistic director and chief conductor of Radio Romania Orchestras and Choirs. In the 1980s and 1990s he was permanent Guest Conductor of major German ensembles: the Berlin Radio Orchestra, the Dresden Philharmonic and the Schwerin State Chapel.

Best known for the landmark performances of the masterpieces of Haydn, Beethoven, Berlioz or Bartók and for his privileged relationship with the superstars of interpretive art, Horia Andreescu is also a remarkable promoter of new music and young talents. He is frequently invited to participate in the judging of international competitions, and through his work as an associate professor of the National University of Music in Bucharest contributes crucially to the growth of new generations of instrumentalists and conductors. Over time, he conducted exceptional ensembles such as the Leipzig Gewandhaus Orchestra, the Berlin State Chapel, the Berlin Comic Opera, the London Symphony Orchestra, the Royal London Philharmonic, the National Orchestra of Russia, the Berlin Symphony Orchestra BBC Scotland, Vienna, Jerusalem, Rejkjavik, Alabama and Taipei Symphony Orchestras, Radio Orchestras in Vienna, Leipzig, Hamburg, Cologne, Copenhagen, Madrid, Katowice, Sofia and Ljubljana, the three ensembles of The Dutch Radio, the Philharmonic Orchestras from Amsterdam, Stuttgart, Budapest, Johannesburg and Nagoya, chamber orchestras from Israel and the Netherlands, Verona Arena Orchestra, Collegium Musicum Copenhagen and Modern Ensemble in Frankfurt.

Born in Tbilisi, Georgia, into a Russian family, she was considered a child prodigy and performed for the first time at the age of 11. Her exceptional talent opened the doors to the Moscow Conservatory for her. During her studies, she won awards at prestigious international competitions including Enescu, Marguerite Long and Queen Elizabeth. The musician was formed under the guidance of Sviatoslav Richter, working with the master contributing decisively to the development of her career. Recognizing the exceptional talent, the great pianist invited the young singer to sing with him in a duet. The collaboration on stage and the personal friendship between Sviatoslav Richter and Elisabeth Leonskaja lasted until the master disappeared in 1997. In 1978, the pianist left the Soviet Union and settled in Vienna. Her remarkable performance at the 1979 Salzburg Festival was the debut of her concertcareer career in Western countries. Elisabeth Leonskaja has performed with almost every major orchestra in the world. Her numerous recordings have often been awarded awards, such as the Caecilia Prize for the Brahms piano sonata disk or Diapason d'Or for theLiszt's worksrecording. Other important records include Tchaikovsky piano concerts with the New York Philharmonic Orchestra under Kurt Masur, Chopin piano concerts with the Czech Philharmonic Orchestra and Vladimir Askenazy, and Piano Concertos by Sanderkovich with the Saint Paul Chamber Orchestra. In Austria, her second homeland, the pianist's exceptional merits were recognized by awardingher important distinctions: Elisabeth Leonskaja is an honorary member at the Konzerthaus in Vienna and in 2006 she was awarded with the Austrian Cross of Honor, First Class for outstanding services to cultural life, which is the highest distinction of its kind in Austria.