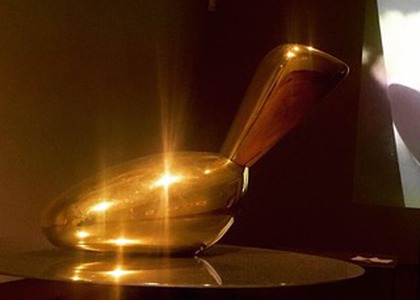 The Europalia Romania Festival, a country project, organized in conjunction with the Romanian Cultural Institute (ICR), ended on Sunday, February 2, 2020, is a success. Over 150,000 people were present at over 250 events of the highest level that represented the Romanian creativity in the world through visual arts, music, cinema, literature, the performing arts.

Romania, guest country of honor of the 27th edition of the International Festival of Arts EUROPALIA, was present, between October 2, 2019 - February 2, 2020, through exhibitions, shows, concerts in Belgium, but also in other countries. - United Kingdom of Great Britain, France, Netherlands, Luxembourg and Germany. The events coordinated by the Romanian Cultural Institute, together with Europalia International in Belgium, took place in the cities of Brussels, Gent, Bruge, Leuven, Liège, Luxembourg, Amsterdam, Aachen and Lille.

Even on the last day, the lighthouse exhibition "Brâncuși. Sublimation of form" at the Palace of Fine Arts BOZAR, recorded a record of visitors. Ass many as 2,500 people in a row were allowed to enter the museum to admire the works of the Romanian sculptor.

In total, between October 2, 2019 - February 2, 2020, the exhibition curated by Doina Lemny, with works by the Romanian sculptor on loan from Tate Gallery in London, Rodin Museum, Pompidou Center in France, Hirshhorn Museum in Washington and Guggenheim Museum in New York, The National Art Museum of Romania, the Art Museum from Craiova and from the collection of the Romanian Academy, was visited by 116,000 people from all over the world. Their Majesties King Philippe of the Belgians and Queen Mathilde, together with the President of Romania, Klaus Iohannis, visited the exhibition "Brancusi. Sublimation of form", at the opening of the festival, on October 1, 2019.

"In EUROPALIA, through the 250 events, the largest program of cultural promotion of Romania has been carried out for four months. The Brâncuși exhibition is probably according to the most important criteria - the value of the artist, the value of heritage objects, the number of visitors - the most important and unique event that Romania has ever held abroad. The exhibition is in the ranking of the first three events held during the festival for a period of 50 years, since EUROPALIA exists, "said Mirel Taloș, ICR's interim president.

"The theme of the EUROPALIA edition, dedicated to Romania, was the dialogue. We tried to combine the diversity of the fields in a harmonious and coherent way and to present ourselves with the peaks of Romanian heritage and contemporary culture. The word that describes Romania's participation at EUROPALIA is excellence ", stressed the interim president of ICR.

Koen Clement, general manager of EUROPALIA International, thanked the Romanian partners at the meeting between the Romanian and Belgian specialists, which marked the end of the exhibition "Brâncuși. Sublimation of the form". At this debate, held on February 1, 2020, at Maison des Arts, Free University of Brussels, the work and personality of the great Brancusi was appreciated. "I am impressed by the emotion I saw, not infrequently, on the faces of the visitors who came in such large numbers to BOZAR, to the largest monographic exhibition dedicated, in Belgium, to Constantin Brâncuşi's work."

The National History Museum of Romania is the coordinator, together with the ICR, of two history exhibitions, showcasing heritage and treasure objects, which remain open at EUROPALIA until April 26, 2020. The exhibition Dacia Felix" which illustrates the presence of the Dacians and their civilization on the present territory of Romania, both before and after the partial Roman conquest, is still hosted by the Gallo-Roman Museum in Tongeren, Belgium, while the Grand Curtius Museum from Liège presents the exhibition "ROOTS - Neolithic Civilization / Bronze Age on the territory of Romania", which illustrates the emergence and development of prehistoric civilizations on the territory of our country. "Dacia Felix had, until December 31, 2019, 13,752 visitors, and ROOTS, until January 6, 2020, 2,297 visitors, according to figures communicated so far by EUROPALIA. We are very pleased that the history exhibitions have been have enjoyed success and remain open, because they have also recorded these visitor records, "said Mirel Taloș, ICR's interim president.

Ion Grigorescu's work, considered one of the most important representatives of the neo-avant-garde, was presented in a large retrospective, "Cinema", during the festival, at the Kiosk Gallery in Gent, Belgium, between November 30, 2019 - February 2, 2020.

The evolution of Romanian art since the middle of the century. XIX to this day was followed by the exhibition "Perspectives" (October 2, 2019 - January 12, 2020), a project about the concept of identity in Romanian art, curated by Wim Waelput, in collaboration with Igor Mocanu.

The contemporary art project "Urs Geest", by artists Casper Fitzhue (Romania) and Bart van Dijck (Belgium), curated by the Curator of the exhibition was Louise Osieka, consisting of an installation and a performance, was presented on October 6 - December 12 at the CIAP contemporary art gallery in Hasselt.

1200 spectators, including personalities from the world of culture, diplomats, politicians, enjoyed, in Brussels, in December 2019, the three performances of the show "The Scarlet Princess", production of the "Radu Stanca Theater" "from Sibiu. On December 19, 2019, at the show directed by Silviu Purcărete, in the Hall of Schaerbeek in Brussels, the President of the European Commission was present Ursula von der Leyen, along with 60 other diplomats, cultural and media business. The theatrical performance "The Scarlet Princess" has the scenography signed by Dragoș Buhagiar.

Performed by Wim Vandekeybs and Ultima Vez, the dance show "Traces" was launched, in the world premiere, in December 2019, in Brussels. They were invited to perform at Bucharest, where the show was represented, on January 9, 2020, on the stage of the Great Hall of the National Theater of Bucharest.

Internationally renowned Romanian artists have been invited to perform on the big stage of the world: soprano Angela Gheorghiu, conductor Cristian Măcelaru, recently awarded a Grammy, cellist Andrei Ioniţă, pianists Alexandra Dariescu, Daniel Petrică Ciobanu and Florian Mitrea. At the festival, the music performed by Ansamblul Raro-SoNoRo, ConTempo Quartet, Camerata Regală was also appreciated. The jazz of the Romanian artists was represented by Lucian Ban&Guests, Ada Milea, along with the quartet of Alexandru Bălănescu, Maria Răducanu,but also by the violonist Florin Niculescu who, together with his quintet, electrified the audience in three concerts of the festival.

One of the most complex projects selected in the festival was "Oedipe Redux", in which "Oedipe", the only opera composed by George Enescu, was transposed into jazz rhythms and reinterpreted in modern key by Lucian Ban, famous Romanian jazz pianist and by Mat Maneri, a Grammy Award-nominated violist.

The traditional music was brought to the attention of the EUROPALIA festival by bands whose special rhythms raised the public in famous halls. Also, the old Romanian music was shared with the Europeans by Ansamblul de Muzică Veche "Anton Pann", and the new age was represented by a series of consecrated Romanian artists.

Romanian electronic music was represented by 11 artists and bands from different generations, including Khidja, Borusiade, Sunbeams and Karpov Not Kasparov.

The focus was also on new creations and interdisciplinary exchanges between Romanian and Belgian artists. In addition to the Taraf Impex project of the Roma musicians, other projects were highlighted during the festival: the filmmaker Antony Nti traveled to Romania to film a clip with the duo Karpov not Kasparov. The Belgian composer Milan W. proposed the first electroacoustic composition for tulnic, a traditional Romanian instrument, which was presented for the first time at the opening event of the EUROPALIA ROMANIA musical program.

The main theme of the literary programme of the EUROPALIA ROMANIA Festival was the dialogue. During four months, there were organized debates, round tables, book launches with a different theme such as: narrative perspective of European common history, personalities of the twentieth century, interference with other arts, Romanian avant-garde seen as an essential part of the European avant-garde, the police novel - literary genre and its metamorphoses, the contemporary Romanian poetry and the paradoxes of today's world. All of these were important forms of dialogue with the Belgian public and with the representatives of the Romanian diaspora. Four writers from different generations, Gabriela Adameşteanu, Ioana Pârvulescu, Mircea Cărtărescu, Cătălin Pavel, spoke, on December 18, 2019, about Romanian literature in a European context 30 years after 1989, at BOZAR, with an essential theme of history of 2019 - the fall of communism. Also, choreographer Gigi Căciuleanu and writer Mircea Dinescu have brought music, dance and culinary art to EUROPALIA.

The programme called Videogramele unei națiuni" had been running for a period of two months, from december 2019 until january 2020, in Belgium and Holland. The programme included canonical films, different debates, productions of the new generation of cineastes. The foreign audience showed interest in short documentaries and animation films, too. The Romanian Cultural Institute has proposed within the EUROPALIA festival a selection of films that highlight important moments of the social and cultural transition in Romania over the last eight decades: from propaganda films to subversive films, from national-idyllic socialism to the realism of the New Romanian Cinema. There were presented over 90 Romanian film productions signed, among others by Lucian Pintilie, Liviu Ciulei, Dan Piţa, Andrei Ujică, Mircea Veroiu, Alexandru Tatos, Nae Caranfil, Radu Jude, Manole Marcus. Also, the series of documentaries was very successful by the public, including "Videograms of a Revolution" (1992), signed by Andrei Ujică and Harun Farocki, "Timebox" (2018), directed by Norei Agapi, and "This is it"(2001) ), signed by Thomas Ciulei.

Events in progress, after the official closure of EUROPALIA ROMANIA

- The exhibition "Rethinking The Image of The World: Projects and Sketches" continues, until February 9, 2020, at the MILL Museum Complex, in the Belgian city of La Louviére. The exhibition, curated by Cristian Nae and Adrian Bojenoiu, highlights the artistic evolution in Romania of the last decade, due to the young generation of artists, and emphasizes the connection of the artistic media in Romania with the international media.

- "New systems: rules and tools - Pren" is open until February 6, 2020, at Vecteur. The exhibition presents a series of works by the illustrator and designer Pren. The artist's goal is to present new forms and compositions in painting, by creating rules and building systems.

- The exhibition "Lovely views. Urbanism and architecture in the Romanian tourism from the Black Sea in the 60s-70s" will continue until March 8, 2020 at CIVA. This exhibition explores one of the exceptional moments of the history of modernity in the Romanian architecture during the socialist regime, the planning and development of the resorts on the Black Sea coast in the '60s-'70s.

The International Festival Art EUROPALIA is considered to be the largest cultural event in Belgium, being organized under the patronage of the Royal Family of Belgium, every two years, in Belgium and in neighboring countries - France, Holland, Luxembourg, Germany, United Kingdom.

The Romanian Cultural Institute was the coordinator of Romania's participation at the 27th edition of the EUROPALIA Festival, a major project that took place between October 2019 - February 2020 and implemented in collaboration with the Ministry of Foreign Affairs, the Ministry of Culture and the General Secretariat of the Government, along with: EUROPALIA International Association, the traditional organizer of the event. The 27th edition of the EUROPALIA Festival was dedicated to Romania.

On May 25, 2016, Romania obtained the status of guest country at the 2019 edition of the International Art Festival EUROPALIA, debuted in 1969, having a multidisciplinary character: visual arts, performing arts, music.

From October 2019 to January 2020, Romania was invited to the 50th edition of the Europalia Arts Festival, an anniversary edition, to which the organizers and partners of the Bariai Cultural Association Europalia International wanted to give due importance, following to create a broad picture of our cultural-artistic diversity.

Romania's participation in this Festival has been prepared and sustained at the governmental level since 2014, and on September 14, 2017, the signing ceremony of the Framework Agreement for the organization of the EUROPALIA ROMANIA Festival was held in Brussels.

The Romanian Cultural Institute coordinated this project, through the Large Programs Service, in collaboration with the Ministry of Foreign Affairs, the Ministry of Culture and the General Secretariat of the Government, which had advisory role according to the Emergency Ordinance no. 16/2018 subsequently become Law no. 39 / 03.06.2019.