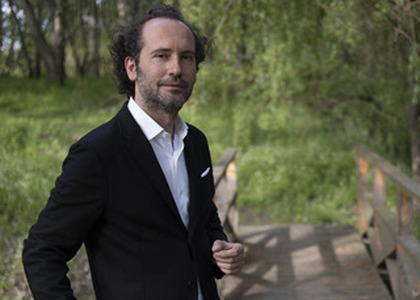 SoNoRo Interferences program for scholarships, dedicated to young musicians, reaches this year it's 14th edition. The auditions will take place on February 22, at the "Gh. Dima" Music Academy in Cluj-Napoca, and on February 23, at the National University of Music in Bucharest.

Starting with this year the age limit for young scholars will start from 14 years and will increase to 35 years. Those wishing to participate in the pre-selections must register by February 20 using this form: https://interferente.sonoro.ro/#inscrieri

"The SoNoRo Interferences Scholarship Program has grown all these years, along with our scholars. Two of them, Luca Pulbere and Francesco Ionașcu, joined us last year, at the workshop at Port Cultural Cetate, as Young Masters, having an intermediate role between students and teachers. Also, at the end of last year, on the Athens stage, we concerted with Andrei Ioniță, one of our first scholars and later winner of the first prize in the cello section of the "P.I.Ceaikovski" Competition in Moscow, which we he was very happy and showed us how many things we have accomplished in all these 14 years. This maturation of the program has determined us, starting this year, to increase the scholarship age limit to 35 years, to allow already experienced musicians to benefit from a higher training program, along with great masters, which it can propel itself on the big scenes of the world", says Răzvan Popovici, the executive director of the SoNoRo Festival and the initiator of the SoNoRo Interferences program.

Some of the impressions of the young Young Masters, following last year's experience, can be seen aici - Luca Pulbere and aici - Francesco Ionașcu.

The winners of the SoNoRo InterferencesScholarships will enter into a training program with dedicated musicians and teachers at important music schools in Europe, in one of the three internships that will take place in Montepulciano, in Italy, at the Port Cultural Cetate, in Romania, and in Traunstein, Germany.Maeștri cu care vor lucra sunt:

Clarinet: Thorsten Johanns / Weimer Academy of Music At the end of each work session, young musicians will interpret the works studied in the workshop, together with their teachers, in concerts specially organized at Montepulciano, the Cetate Cultural Port and Traunstein.

The SoNoRo Interferences scholarship is aiming at young musical talents and consists of free courses (chamber music + solo instrument: piano, violin, violin, cello and clarinet), covering the transport costs from Bucharest to the locality of the workshop and staying during the program. . More details at https://interferente.sonoro.ro/.

SoNoRo Interferences, the educational program of the SoNoRo International Chamber Music Festival, began in Romania in 2007 and has since expanded to other European countries, including Italy (Arezzo and Montepulciano), Ukraine (Kiev), Germany (Bad Endorf , Neuwied and Traunstein) and Belgium (Royal Conservatory of Antwerpen). Among the places in Romania where the SoNoRo Interferences workshops were held are: the Cetate Cultural Port, the residence of the National Bank in Păltiniș and the Cantacuzino Palace in Bușteni.

The SoNoro Interferences program is aiming for Romanian musicians, between the ages of 14 and 35, and was initiated with the aim of creating, in the long term, a musical elite, continuing the SoNoRo Festival's initiative to include Romania in the peak circuit of life. European musicals. Many of the scholarship winners have achieved remarkable results and are currently studying at prestigious music institutions in London, Berlin, Vienna, Zurich, Hamburg and Bucharest. Some of the scholars have participated in important contests around the world and have ranked in the top places, an example in this respect being the success of one of the SoNoRo Interferences scholars, Andrei Ioniță, who won the first prize in the Cello section of the "PICeaikovski" Competition. , from Moscow.