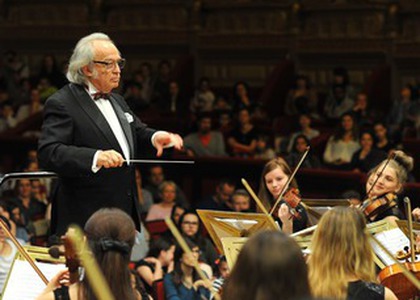 Classic is fantastic. How to understand the music (10!) Nicolae Racu – 75

The teachers must be honest. They mould minds and souls and, the true ones, do so with great effort and even self-sacrifice. Fewer and fewer are those who, out of passion and faith, want to truly devote their lives to younger generations. The responsibility is huge. And the satisfaction, not always as the effort that is invested. Therefore, when a teacher has over 50 years of activity in the department, turns 75 and still wants to educate young musicians, we honor him accordingly. Classic is fantastic proposes, in March a.c, a concert dedicated to the teacher and conductor Nicolae Racu. The teacher and conductor chose to include in the morning program works belonging to composers that we celebrate or commemorate this year.

Classic is fantastic. How to understand music (10!)

Orchestra of the National College of Art Dinu Lipatti

• Piotr Ilici Tchaikovsky / 180 years since his birth - Concerto No 1 in B-flat minor Op 23/145 years since the first audition. part I