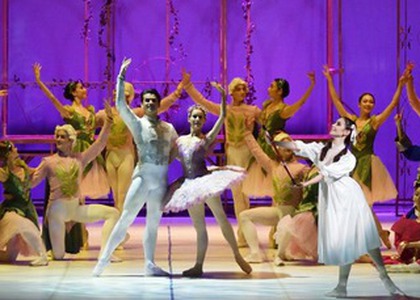 The Nutcracker, a fairy tale translated into ballet steps on the Bucharest National Opera stage

The Bucharest National Opera presents Friday, 21 February 2020, starting from 18:30 the ballet spectacle "The Nutcracker" by Piotr Ilici Ceaikovski with the Oleg Danovski's choreography, the directorial and choregraphic adaptation bears the signature of Oleg Danovski Jr., the scenography was made by Andreea Koch. The master Iurie Florea will be the conductor.

The choreographer Oleg Danovski Jr., about the spectacle "The Nutcracker" on the stage of the Bucharest National Opera: "The Nutcracker presents a story between reality and Clara's dream on the Christmas night, a ballet full of magic, color, fascination, dynamism, and at the same time the most expected ballet performance of the winter holidays season. I am very glad that this centenary year I succeeded to collaborate with the Bucharest National Opera sharing this wonderful spectacle from our heart which, unfortunately, was missing from the repertory for many years.

I found here talented, professional and dedicated ballet dancers and masters as it is necessary to have on the most important stage of the country. We did not have a lot of time, but we succeeded together in just two months to do a show which the public certainly is waiting for eagerly and with enthusiasm.

I'm inviting the public of Bucharest National Opera to discover the magic land, to live the story together with the characters and to be witnesses of this enchanting ballet, originally mounted by Oleg Danovski."

Ceaikovski had started to work on his creation " The Nutcracker" on January 1892 and in March it was finished proving a surreal inspiring force which created a masterpiece in which music and dance are combined into a total perfection.

The famous ballet "The Nutcracker" conquered the public of all ages even from the world premiere on the stage of the Imperial Mariinski Theater, Sankt Petersburg which was on 6 December 1892. Piotr Ilici Ceaikovski became thus the composer who made the children from all over the world be happy on holidays giving them the most beautiful present: a fairytale with a lyrical tradition which continues to announce nowadays as well the winter holidays with excitement and on charming scores.

Due to its success, the famous ballet has been put over the years successfully into motion pictures, cartoons or ice ballet, the Russian composer being based on the fairytale "The Nutcracker" by Alexandre Dumas. The winter story brings us into the fairytale atmosphere in which the dance, the emotion and the symphony come together into a dream vals.

The tickets can be found on http://tickets.operanb.ro/ and at the box office of the Bucharest National Opera(program Monday-Sunday between 10am-1pm and 2pm-7pm)