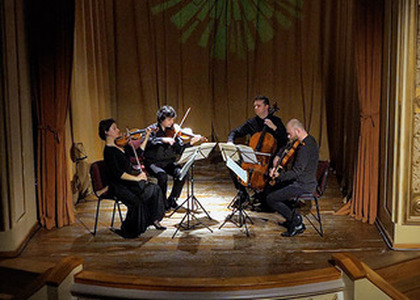 "Fantasy and colorful sounds" is the heading under which the National Art Center Romanian Youth invites the public Tuesday, on 25 February 2020 at 18, at Romanian Youth Palace at the Arcadia Festival recital composed of Ana Török - violin, Răsvan Dumitru - violin, Traian Boală - viola and Zsolt Török - violoncello.

The recital is called "Fantasy and colorful sounds" and is made by the author Mieczysław Weinberg, who will present in national premiere the String Quartets nr. 5 op. 27, nr. 8 op. 66 and nr. 2 op. 3/145.

Composing the band with the most active international presence at this moment, the young musicians of Arcadia cvartet start with this concert a large project dedicated to the composer Mieczysław Weinberg, influenced by the congener and also his friend Dmitri Sostakovici and at the same time admired by this one because of his creations.

The public in Bucharest will get in touch with a music full of vigor, intensity and visual suggestions, Mieczysław Weinberg being recognised in the era as one of the supporters of the programmatic music.

"Fantasy and colorful sounds" sets up a new visit with the performance art of high-class of Arcadia cvartet on a music never heard before on our stages, which will certainly captivate the public.