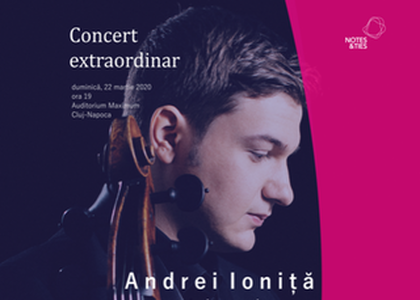 One of the most worldwide appreciated Romanian musicians, the exceptional cellist Andrei Ioniță returns to Cluj with an extraordinary chamber recital. The event will take place on Sunday, March 22, 2020, from 7 pm, in the Maximum Auditorium (Casa Universitarilor) and will include works by Beethoven, Schubert and Șostakovici.

Described by The Times as "one of the most captivating cellists in the last decade," Andrei Ioniță won the 1st prize at the Tchaikovsky International Competition in 2015 and prizes at the ARD, Emanuel Feuermann and Aram Khachaturian competitions. In 2016 he was appointed "BBC New Generation Artist" for the period 2016-2018, and in the 2019-2020 season he is artist-in-residence of the Symphoniker Hamburg.