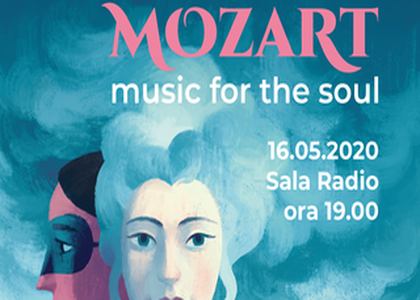 On Saturday, May 16th, 7 PM, the Victoriei Avenue Foundation will be welcoming you to the Gala Concert "MOZART - Music for the Soul" held in the Radio Hall.

This event, organised together with the conductor Tiberiu Soare and Symphactory Orchestra, a remarkable independent orchestra, will be hosting two exceptional soloists: the soprano Mădălina Barbu and the baritone Alexandru Constantin.

The evening program will also include the famous and spectacular Symphony no. 25, composed by Mozart at only 17 years old, overtures and arias from famous works: Figaro's Wedding, Cosi fan Tutte, Don Giovanni, La Clemenza di Tito and The Magic Flute.

For this concert, the conductor Tiberiu Soare selected two voices of remarkable force and expressiveness, Mădălina Barbu and Alexandru Constantin, lyrical artists who will enchant us by bringing to life the characters of Mozart's works.

The gala night will end in joy, applause, photos with the musicians, and also autographs offered by the conductor and the two soloists, in the lobby of the Radio Hall. The event is the fifth in the series called "I love Classics", launched by the Victoriei Avenue Foundation in 2016 and dedicated to great composers of classical music and opera.

The tickets for the Gala Concert "MOZART - Music for the Soul" can be purchased through the Eventim network: the Vodafone, Orange, Germanos shops, Carrefour, Cărturești and Humanitas Bookshops, the OMV gas stations and online platform here.

Reservations and registrations for the concert cannot be made on the Foundation's page; the tickets can only be purchased through the EVENTIM network.

The Gala Concert"MOZART - Music for the Soul" is organisedwith the help of Bondoc and Associates Law Firm and Renovatio Trading.

The Victoriei Avenue Foundation is the only place in Bucharest where you can develop with the help of art and culture, through a wide variety of courses and cultural and interactive events. We've been inspiring through art and culture and supporting talented young people for over 12 years. We've anaged to work as pioneers in the way in which cultural events are organised and, over the time, we've become an academy owhere over 100 researchers, artists and trainers have shaped their careers as lecturers.

We take pride in over 50000 learners that took part in our projects and over 3000 young people who benefited from scholarships (free participation in their favorite courses). We are thankful to all those who have stayed by our side during all these years: the National Military Circle, Grand Hotel Continental, the National University of Music in Bucharest, the National Bank of Romania, Odeon Theatre and Cotroceni National Museum.