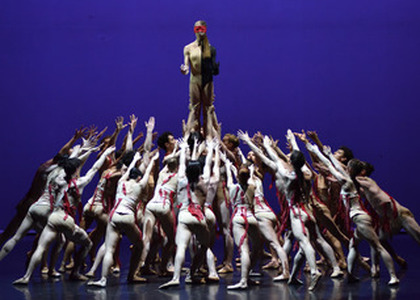 Ion Caramitru, guest in the show "Peer Gynt" and "Carmina Burana "on the scene of the Bucharest National Opera

The Bucharest National Opera presents on Saturday, March 7, 2020, starting with 6:30 pm the show "Peer Gynt" by Edvard Grieg and "Carmina Burana" by Carl Orff, the choreography bears the signature of Davide Bombana, the costumes, the staging and the lights were created by Mario De Carlo, scenography assistant Andreea Koch. At the conductor's desk will be the master Tiberiu Soare, the Choir of the National Opera of Bucharest was prepared by Daniel Jinga, and the Children's Choir by Smaranda Morgovan.

"Peer Gynt" by Edvard Grieg will bring the actor Ion Caramitru to the public, as a guest of the country's first lyrical scene. The second part, "Carmina Burana" by Carl Orff will be performed by the ballet, soloists, choir and orchestra of the Bucharest National Opera.

The choreographer of the show comes with an innovative and daring proposal for the setting of the Bucharest National Opera scene, as he himself states: "For me, the most uplifting aspect of Carmina Burana's singing is the acceptance of humanity's vulnerability and inability to face destiny, with its constant changes. In spite of this, the human being, in his desperate attachment to life, vainly tries with all his power to forget the past and to fight against the sword of Damocles that hangs over his head, through the miracle of nature and the awakening of spring, through the love of form. -the purest to the most debauched, by religion with its essence, incoherences and even its vices, mankind tries to find a way to survive, never leaving itself in the will of the crushing destiny, always changing and implacable. "

There is no actual story in "Carmina Burana". The work begins with all the dancers who feel threatened by the destructive power that lies above their heads.

The second scene brings us to the foreground of 20 men trapped in an angry circular dance, a movement that represents, in fact, the constant battle and revolt of the people to the injustice of destiny.

The next section of the play talks about people's joy and the coming of spring. Four couples engage in a sensual dance surrounded by the warmth of the sun, joined by a group of young girls, who discover their desires. The scene ends with a vital duo, full of harmony and joy of life.

The next part, "In the Tavern", talks about all the sexual desire, almost tormenting that dominates the whole choreographic frame. Due to the religious climate marked by violence, aggression and hatred, the atmosphere of repression becomes pregnant, being represented in this painting by a male role and a trio of monks. The following scenes are a continuation of the bodily desires present in this section.

The next section, on the contrary, talks about love or, rather, about the strong desire for unfulfilled love. Three different solos present these states of melancholy, sadness and dreams.

In the last part of the choreographic work, an episodic and mysterious presence, Fortuna, now becomes dominant. She is enigmatic, of a dual nature. Raised as an idol, she is recognized as the sovereign of all human destinies. After her exit, humanity is again forced to dissolve in front of the almighty, threatening force that presses over all of humanity, closing the ballet as it began, in a cyclical return of events.