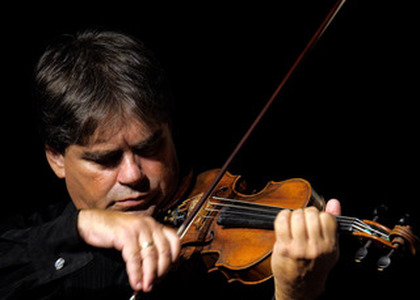 After theoutdoor and indoor concerts in June and September in Bucharest, Focşani, Bârlad, Tecuci, violin player Gabriel Croitoru together with pianist Horia Mihail and Enescu's Violin make their comeback with the first stage of the national tour this autumn, starting on the 17th of October, in Ploieşti, Slatina, Craiova and Bucharest.

Gabriel Croitoru, the violin player who has the privilege of playing the Guarneri del Gesu violin, called "The Cathedral", which George Enescu played (an instrument made available and found in the patrimony of the "George Enescu" National Museum) and pianist Horia Mihail perform, on stages throughout the country, famous sonnets for violin and piano by Ludwig van Beethoven, whose anthology they will create this autumn at Sala Radio, during the Beethoven 250 anniversary, live, on air and online.

The series will end on the 20th of October, 7 PM, at Sala Radio, where the concert will be broadcaston air and online on the frequencies and sites of the Radio Romania Cultural and Radio Romania Music stations.

Unclassifiable within his own creation, one can find Beethoven in the same situation, if one relates to the historical categories. Classical or romantic? Beethoven seems to effortlessly surpass these alternatives in which one tries to confine him. Being on the border of two spiritual universes, his creation avoids, through its nature, history: singular, permanently connected to the present, this creation is modern, it defines, it explains, it materializes the notion of modernity itself - notion which, in turn, the modern man explains, recreates, reshapes in their own language. In the dialogue which every generation, each individual has with the Beethovenian work, it proves itself more contemporary and more innovative than ever.

It has been over a century since George Enescu used to course the country during the First World War with his violin to bring his music to the sick, tothe wounded in the war, to the people in need. The very same instrument - by virtue of Gabriel Croitoru's altruism, the violin player who,through competition, earned his right to play the "Cathedral", as the famous violin manufactured by the great Guarneri del Gesu is called - takes part in the same noble mission: that of bringing the musicall over the country, where it is needed the most.

Gabriel Croitoru: "I have the great joy of having won,a few years back, the right to use the "Cathedral" violin, manufactured by Giuseppe Guarneri, so-called "del Gesu",which belonged to the Maestro, which today is in the custody of the "George Enescu" National Museum. I don't believe there is greater joy than that of being a part of such a valuable instrument's life, which has passed through the hands of many extraordinary violin players in its three centuries of existence. I'm saying extraordinary because of the way this instrument has been preserved, being a known fact that any string instrument must be played to keep and even improve its sound qualities. The wood - Romanian kind, it seems - out of which these violins were made has dried up in time and, at the same time, vibrating together with the souls of those who have handled it throughout the years, it has evolved. This vibration is still passed on to those who come and listen to us in the concert hall or during the tours which we have undertaken during these last years with pianist Horia Mihail. The "George Enescu's Violin" Tour, which has already become a brand, has brought joy to many of the hearts of the people who came to listen to the stories about the instrument, about the performed works and, not least, about the perpetration of the tradition which George Enescu started more than a century ago, that of bringing comfort, a drop of good music where it would not have been accessible, i.e. in villages, in parks and highschools."

If in the first editions we questioned the virgin territory of the community centres in the villages in the most remote places in Romania, in the places where the sound of classical music had never arrived, there had been tours on which Enescu's violin sought the wandering pianos left in different cities in the country by Horia Mihail and, obviously, at Sala Radio. And years when he played in Beijing, in London, in Spain, Portugal. And in 2021, he will get ready to get to Tokyo. The "Enescu's Violin" national tour will carry on in October - November 2020.

Tuesday, the 20th of October - Bucharest, on air and online at Sala Radio