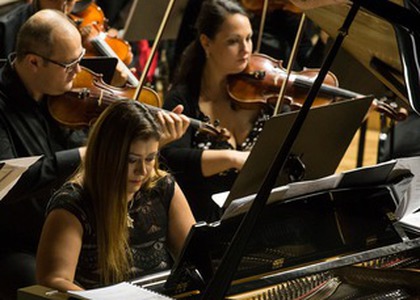 Beethoven's year at the Pitești Philharmonic

The Pitești Philharmonic organizes on Thursday, November 5th, at 7 pm, at the headquarters of the Multifunctional Center, the first symphonic concert of the month, respecting all the rules to avoid contamination with the new coronavirus. Along with the symphony orchestra of the Pitești Philharmonic, conductor Mihail Ștefănescu and soloist Ioana Maria Lupașcu return. In the "Year of Beethoven" the evening program will include the Concerto for piano and orchestra in E flat major, Imperial and Symphony no. 1 in C major belonging to the great German composer.

Born in Craiova, in a family of musicians, the choir and orchestra conductor Mihail Ştefănescu dedicated himself passionately to the study of theart of sounds. He graduated from the Music High School in Craiova and the "Ciprian Porumbescu" Music Conservatory in Bucharest. He considers himself a conductor, both on the national and international stage, especially by re-establishing, in 1981, the "Euphonia" choir from Râmnicu-Vâlcea, with which he won numerous distinctions at national and international festivals and competitions. He casually approaches a vast choral and symphonic repertoire, from classics to contemporaries. He has toured in: France, Italy, Spain, Austria, Belgium, Switzerland, Hungary, Bulgaria, South Korea, etc. In recognition of his artistic activity, Mihail Ștefănescu is invited in the juries of some national and international interpretation competitions. In 1995 he supported the establishment of the "Ion Dumitrescu" Philharmonic in Râmnicu Vâlcea, being its director for a longtime.

Born into a family of doctors, Ioana Maria Lupaşcu began studying the piano at the age of four, and in two years she performed for the first time in front of the public. She studied at the "George Enescu" High School and at the National University of Music in Bucharest, improving her skills both in Switzerland and Italy. Since 2008, she has been a concert soloist of the "Paul Constantinescu" Philharmonic in Ploieşti. She delivers recitals and concerts all over the world, performing successfully in nationally and internationally renowned venues. She performed with the orchestras of the country philharmonics, conducted by: Ilarion Ionescu-Galaţi, Florin Totan, Tiberiu Soare, Petre Sbârcea, Ovidiu Bălan, Radu Postăvaru and others. She has released two CDs so far. In addition to her musical talent, Ioana Maria Lupaşcu writes as well, publishing numerous articles, as well as an autobiographical novel.

The two guests were also present at the Pitesti Philharmonic last seasons.

Before entering the concert hall, people will have their temperature measured, and access to the hall is allowed only with a mask. During the concert the public has the obligation to wear it. At the concerts of the current season (until the end of the year), it will no longer be possible to respect the seats registered on the season tickets. The spectators will be sitting in the order of arrival only on the marked seats available in the hall.