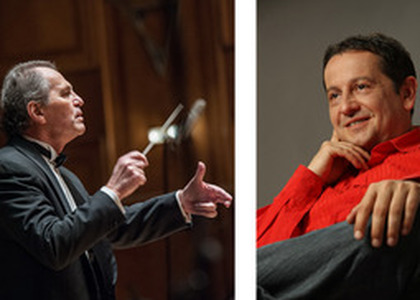 Live Concerts from Sala Radio: Mozart played on the Stradivarius Elder-Voicu violin and Beethoven performed on the Enescu violin.

Live music at Sala Radio, a cup of scented tea and a comfortable chair are "the ingredients" of a perfect autumn night! The orchestras and the Romania Radio Choirs continues their season on the vibration path, through concerts streamed live at Sala Radio, Cultural Romania Radio and Musical Romania Radio on all the frecquencies and in live streaming on internet, on www.radioromaniacultural.roand www.romania-muzical.ro.

A part of the concerts of the season will be streamed as well in live streaming on the official group of the Orchestras, the Radio Choirs and on the Romania Radio Facebook pages.

The conductor CRISTIAN MANDEAL at the RADIO ORCHESTRA ROOM, the violinist ALEXANDRU TOMESCU and a MOZART/BEETHOVEN program define the poster of the event scheduled on Wednesday, on 4 november(19.00), the first concert of the month november streamed LIVE at Sala Radio! CRISTIAN MANDEAL has over 45 years of activity in which he conducted hundreds of concerts on 4 continents, in 35 countries.

The acclaimed violinist ALEXANDRU TOMESCU, who performs on the famous STRADIVARIUS Elder-Voicu violin, suggests the public the no.3 Concert for violin and Mozard orchestra. Soloist of the Orchestras and Radio Choirs, Alexandru Tomescu performed under the wand of some important conductors, including Kurt Masur, Valery Gergiev, Vasilii Petrenko, in famous rooms like Berliner Philharmoniker, Carnegie Hall, Concertgebouw Amsterdam, Théâtre des Champs-Élysées.

Under the sign of the Beethoven International Year(250 years from the birth), in the second part of the evening from Sala Radio you will listen to the no. 1 Symphony. Although it is composed under the influence of the Viennese musical classicism, in the "shadow" left by Mozart (whom he admired) and Haydn(who was his teacher), the first symphony already makes the personal "voice" of Beethoven distinguish, that came to change, through the following works, the canons of music. The premiere took place at Burgtheater (the Viennese national theatre) on 2 april 1800.

The concert will be streamed as well in live streaming on the official group of the Orchestras, the Radio Choirs and on the Romania Radio Facebook pages.

Thursday, 5 november (19:00) two of the soloists of the institution, whose visit card speaks for itself- violinist GABRIEL CROITORU and the pianist HORIA MIHAIL - delights the public from home with an exceptional musical event, from the series with 3 recitals with the Integral of the ten sonatas for violin and piano composed by Beethoven. You will listen from the Sala Radio the Sonatas no. 1,5- The Spring Sonata and the Sonata no.8

GABRIEL CROITORU has, from 2008, the right to play the universal patrimony violin Guarneri, that belonged to George Enescu, instrument within the administration of the "George Enescu" National Museum. The violinist evolved as a soloist in the company of some important orchestras from the entire world, like: London Royal Philharmonic, the symphonyc orchestras from Monte-Carlo, Salonic, Malaga, Sevilla, Cannes, Lyon, etc.

After 14 years of studies in Romania, the pianist HORIA MIHAIL followed the courses at the University in Illinois, obtaining the bachelor's and master's degree in 1995. After he was university lecturer at Boston University, Horia Mihail returned to Brasov in the autumn of 2002 as a soloist of the Philharmonic and member of the already famous band "Romanian Piano Trio", next to the violinist Alexandru Tomescu and the cellist Razvan Suma, with whom he had recitals and concerts at Berlin, Praga, Munchen, Paris, Lisabona, Londra etc.

For more information about the Orchestras and Radio Choirs please visit www.orchestreradio.ro.