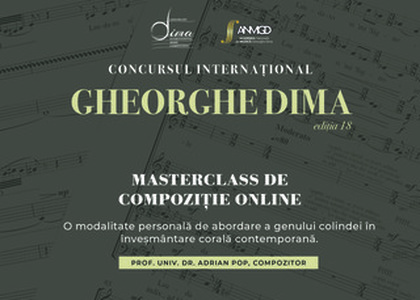 "Gheorghe Dima" Music Academyorganizes the 18th edition of the "Gheorghe Dima" International Competition, one of the most prestigious contests dedicated to young musicians.

Following the success from 2018, this year'sedition included a new section, namely composition. Therefore, 28 young people up to 36 years old, from 16 countries, signed up; their participation involved composing a piece for a mixed a capella choir, for 4 to 8 voices, lasting 3 to 4 minutes, on a text decided by the candidate, in one of the following languages: Romanian, English, French, German, Italian, Spanish or Latin.

On Sunday, the 1st of November 2020, the winners were announced:

The jury was represented by professors and composers from prestigious universities:

Moreover, an important event will take place on the 6th of November, 10 a.m., when the eminent composer from Cluj, Adrian Pop, head of the jury, is going to host an online artistry course for all thecandidates entered in the Competition, as well as for the young artists interested in "A personal modality of approaching the Romanian carol under the contemporary choral appearance". The login information is: meeting ID: 814 8032 0870, password: 557935.