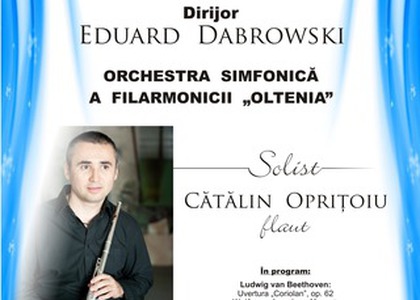 Beethoven's music keeps the hope alive and elevates in this challenging year for all humanity. Coriolan Overtureand Symphony No.2, the two works composed by the titan from Bonn, will be conducted by the young musician Eduard Dabrowski, on Friday, November 6th, at 7 PM, from the rostrum of the OlteniaPhilharmonic's Symphony Orchestra in Craiova.

The power and energy of the genial German composer are completed by the grace and refinement of the other genius of classical music, who had left behind many mysteries. The Flute Concerto No. 1 by Mozart will be interpreted by the cherished artist CĂTĂLIN OPRIȚOIU, who is the multiple winner of the Silvestri International Competition, and other important contests. The concert premiere will be broadcast on Friday, November 6th, starting at 7 PM, and it can be followed by accessing this link:

Eduard Dabrowski is a young Romanian composer and conductor, born in Brașov, Transylvania. He is especially renowned for the score of the documentaries Sw!m and Banat Mountains, the soundtracks of which are available worldwide on all the musical platforms from all seven continents. Besides, he is the composer of different commercials, trailers, and even the music intended for concert halls.

CĂTĂLIN OPRIȚOIU - an artist with an impressive record of achievements

CătălinOpriţoiu started learningthe flute at the age of six, under the guidance of his father, professor Virgil Opriţoiu. He went to DinuLipatti Music High School (known now as DinuLipatti National College of Art), and to the National University of Music Bucharest, studying in the class of prof. IoanCațianis, and completing his BA studies with an MA degree in the class of prof. Virgil Frâncu. In parallel, he took several artistic refresher courses, organized in Romania and Germany, with professors Demetrius Popp, Aurèle Nicolet, Philippe Boucly, and Irena Grafenauer. In 2009, he got his PhD in music, with Magna cum Laudae distinction, for his thesis called Stylistic and Interpretative Aspects in Some Flute Works in the Romanian Music from the Second Half of the 20th Century. Performance - an Act of Creation. CătălinOpriţoiu has an impressive record of achievements: a multiple Laureate of the Silvestri International Competition, Romania (1990-1993); First Prize at the National Competition for Musical Interpretation, and at the International Flute Competition in Timişoara, First Place at the 2007 Volos International Flute Competition, Greece. In 2004, he performed as the solo-flautist of the Seoul Philharmonic Orchestra (South Korea). In 2005, he graduated the artistic master's course for soloists from the University of Music and Performing Arts Munich (Germany). The same year, he founded the Camerata Classica Orchestra and has been performing as its permanent soloist since, having many collaborations with radio and television. Between 1998 and 2011, CătălinOpriţoiu was the concertmaster of the George Enescu Philharmonic Orchestra. Now, he is the soloist of the Bucharest Symphony Orchestra. Cătălin is equally dedicated to the teaching practice, being a University Lecturer, Dr. at the Flute Department of the National University of Music Bucharest.

Beethoven and Mozart - two geniuses of the Viennese Classicism

Coriolan Overture, Op. 62 dates back to 1807. The composition was not inspired by the homonymous tragedy written by Shakespeare, as one may think. Beethoven completed this masterpiecedue to the great respect for, and the friendship of the Viennese writer Heinrich Joseph Collin. Highly impressed by the noble subject of one of the writer's plays, the composer dedicated him this overture as a tribute.

1802, the year when Beethoven composed Symphony No. 2, was the beginning of an unprecedented, and most prolific period in his life. He wrote to a friend: "I'm fully immersed into my scores, and, having just finished one composition, I'm beginning to work immediately on the other. In the way I'm working now, I often find myself working on three, four pieces simultaneously." As Hector Berlioz mentioned, "in this symphony, everything is noble, full of vitality, monumental; the introduction (Adagio molto) is a masterpiece."

In December 1977, a Dutch captain, named Ferdinand de Jean, wrote to Mozart, asking him to compose several pieces for his favourite instrument - the flute. The captain specified his abilities, telling Mozart that he wants these pieces to be "neither long, nor difficult."

Staying in Mannheim at that time, Mozart had finished the compositional labour quickly, writing two concertos and three flute quartets, even though the instrument did not particularly appeal to him. The Concerto No. 1 in G major, K313 has, aside from the elaborate solo part, a balanced orchestral distribution, which is handled delicately.