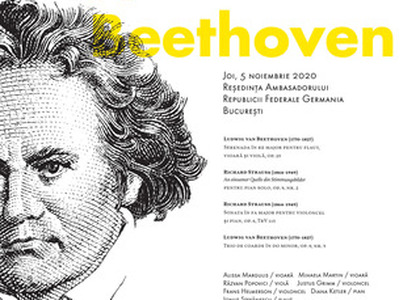 The first part of the XVth edition of the SoNoRo Festival, "Pasărea Măiastră" , ends on Thursday, November 5th, with anonline concerto broadcast from the Residence of the Ambassador of the Federal Republic of Germany, at 7.30 p.m.

The concerto will be broadcast live on the SoNoRo platform https://festival.sonoro.ro/live/ and on those of the partners, namely Raiffeisen Bank https://art.raiffeisen.ro/ and Vodafone Business https://www.vodafone.ro/impreunamaiputernici , but there will also be a special screening in the J'ai Bistrot garden in Bucharest.

"We conclude the first part of the current SoNoRo Festival, that was reinvented and reborn like a Phoenix rising from the fire of this difficult time. The concertos were broadcast exclusively online, but we made an effort to recreate the atmosphere of a concert hall for the ones watching us from home. The upside of these transmissions is that we can invite an audience from all over the world in hardly accessible or even inaccessible places like the Residence of the Ambassador of the Federal Republic of Germany, from where we will broadcast the last live concertos. I have always said that music opens the doors of the soul and of the mind, with these live concertos we will also open virtual doors to Bucharest's salons, where it would have been physically impossible to receive a great number of people. We rejoice in this virtual accessibility, but we hope to see each other again in the concerto halls at the beginning of December, for the second part of SoNoRo Festival XV."

"This programme celebrates 250 years since Ludwig van Beethoven's birth. In the end, Beethoven's music unearths the essence of what it means to be human. For us, musicians, interpreting his revolutionary and profound pieces puts our mind, heart and "inner compass" in order, which was greatly needed this year. We hope that, by listening to our interpretation, the same feeling will be conveyed to the audience, whom we greatly thank for following our concertos up until now."

The concertos broadcast online are available for free on the official platform and the partners' platforms. The ones wishing to reward the work of the artists can make a direct donation to the Sonoro Association: https://sonoro.ro/donatie/

For additional details and the complete schedule: www.sonoro.ro

Founded in 2006, the SoNoRo Festival brought chamber music at the forefront of Romanian cultural life and included the Romanian musical scene in a renowned network of European festivals. Besides regular collaborations with festivals in Italy, Latvia, Germany, England, Israel and Japan, SoNoRo also performed in some of the most acclaimed halls in the world, like Wigmore Hall in London, Konzerthaus in Wien, YMCA in Jerusalem and Carnegie Hall in New York.

The SoNoRo cultural platform includes the SoNoRo Festival (15 years), SoNoRo-Interferences, the scholarship program and workshops for young musicians (14 years), SoNoRo On Tour (13 years), SoNoRo Arezzo (10 years), SoNoRo Manor, the summer concerts hosted by Romanian heritage buildings (8 years) and SoNoRo Musikland - a festival dedicated to the traditions and architectural heritage of the Haferland area (2 years). SoNoRo is a member of the European Festivals Association.