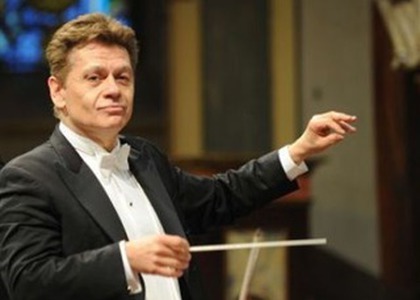 ‘An Alpine Symphony’, conducted by Christian Badea, will be broadcast at the ‘George Enescu’ Philharmonic, within the online season

The concert will be broadcast on the online platforms of the institution, as well as on the Facebook page of Radio Romania Music.

"Horn Concerto No. 4 is probably one of Mozart's brilliant ones for this instrument. We are lucky to be collaborating with one of today's most important musicians, the British hornist Martin Owen, former soloist at the Berlin Philharmonic, current section leader at the BBC Symphony Orchestra in London and horn teacher at the Royal Academy in London. He came to Romania several times, and performed the Horn Concerto No. 1 by Richard Strauss, as soloist, with the "George Enescu" Philharmonic. The second part of the concert will be consisting of An Alpine Symphony by Richard Strauss, a difficult, complex, yet lyrical and dramatic composition interpreted by a very large orchestra. The soloist Martin Owen joins the Philharmonic Orchestra within An Alpine Symphony as section leader of the orchestra", declared the conductor Christian Badea.

The recording of the concert from the 27th of April 2018 can be listened to on the online platforms of the "George Enescu" Philharmonic: site (https://www.fge.org.ro/), Facebook page (https://www.facebook.com/filarmonica.george.enescu/) and YouTube channel (https://bit.ly/2wMctlw).

The media partner of the event is Radio Romania Music. The recording of the concert is also broadcast on Thursday evening, on the Facebook page of Radio Romania Music (https://www.facebook.com/Radio-Rom%C3%A2nia-Muzical-227784404990).