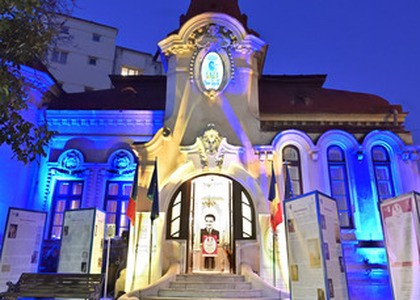 Romanian Music Month at the ‘Dinu Lipatti’ House of Arts

The 'Dinu Lipatti' House of Artscelebrates in November the centenary of the Romanian Composers Society. In 1949,itbecame the Union of Romanian Composers and Musicologists, Dinu Lipatti being our spiritual mentor, pianist, composer and pedagoguealso a member with great honor. As a sign of appreciation and recognition, the 'Dinu Lipatti' House of Artstitled the month of November 'Romanian Music Month'. All online premieres that will be broadcasted in the following weekends are dedicated to Romanian composers and performers.

We kindly invite you to watch the online premiere of the Extraordinary Recital of Romanian Music on our Facebook Page, on Saturday, at 5 PM. The Recital will be performed by flutist Cătălin Oprițoiu, violinist Luminitza Petre, pianist Ioana Maria Lupașcu and the 'Trio Mozaic' Ensemble. These are some selections from the International Festival 'Meridian' which took place at the 'Dinu Lipatti' House of Artsand some recordings from 2018 and 2019.

The flutist Cătălin Opriţoiu started his flute lessons at the age of six, under the guidance of his father, professor Virgil Opriţoiu. He was a student at the 'Dinu Lipatti' National College of Arts and attended the courses of the National University of Music in Bucharest in the class of Prof. Ioan Cațianis. After taking his bachelor's degree, he started the master studies, in the class of Prof. Virgil Frâncu. In 2009 he got his PhDin Music for his thesis "Aspecte stilistice și interpretative în unele creații pentru flaut din muzica românească în a doua jumătate a secolului XX. Intepretarea - act creator."(Stylistic and interpretive aspects in some creations for flute in Romanian music in the second half of the twentieth century. Interpretation - creative act). Cătălin Opriţoiu was theprinciple flute player of the "George Enescu" Philharmonic Orchestra between 1998-2011. He is the co-founder of the Bucharest Symphony Orchestra and currently he is also the soloist.

The pianist Ioana Maria Lupașcu began her piano lessons at the age of four. She was a student of the great pianist Lazăr Berman, at the Academia Europea di Musica, Italy (2001-2005) and sang conducted by the batons of some important conductors: Gottfried Rabl, Mika Eichenholz, Ladislau-Petru Horvath (Italy), Sabin Păutza, Tiberiu Soare, Theo Wolters (Netherlands), Walter Hilgers or Shinya Ozaki. She has been the concert soloist of the Paul Constantinescu Ploiești Philharmonic since 2007. She has been invited to festivals, such as the Pazailis Music Festival Lithuania, the Great Musical Evenings of Bucharest, the Proms of Delight Gala, the Mozart Festival of the Brașov Opera.

The violinist Luminitza Petre is a graduate of the Bucharest Academy of Music in the class of professors Valeriu Rogacev and Cornelia Bronzetti. She attended master classes with Stefan Gheorghiu, Valery Gradow, Zachar Bron in Mannheim and Vienna. She recorded the Complete Sonatas and Partitas for Solo Violin by J. S. Bach on a double CD. The part was highly regarded in press reviews and it was nominated for an "Academy Award" in Tokyo. Luminitza Petre plays the Matteo Gofriller violin - Venice 1690.

In over 24 years of activity, Trio Mozaic has recorded numerous performances in the country and abroad. It is made upof the musicians Oana Spânu-Vișenescu - violin / viola, Emil Vișenescu - clarinet and Diana Spânu-Dănilă - piano. The trio was guided by two famous masters: Prof. Dr. Șerban Dimitrie Soreanu and the cellist of the American Fine Arts quartet, Wolfgang Laufer. The Mozaic Trio was invited to the international festivals S.I.M.N. and Meridian (Bucharest), Orpheus Prijs (Antwerp), and U.F.A.M. (Paris), Fifteen minutes of Fame;as they often approached a complex repertoire, covering creative periods from classical to contemporary, numerous works being dedicated to them, following the close artistic collaboration with prestigious composers.

We look forward to seeing you on the Facebook page of the 'Dinu Lipatti' House of Arts, a House of all Arts, the Cultural Center of Bucharest that promotes Excellence in National and International Classical Culture!