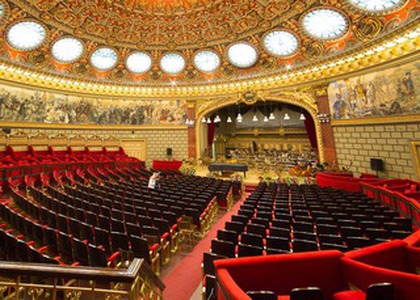 Conductor Camil Marinescu and pianist Elizabeth Sombart, in the online season of the “George Enescu” Philharmonic

On Thursday, November 19th, 2020, from 7 PM, the "George Enescu" Philharmonic will broadcast, during the online season, the recording of a concert conducted by Camil Marinescu (1964-2020), former principal conductor of the institution. The program of the Symphony Orchestra of the "George Enescu" Philharmonic, presented on December 20th, 2018, consists of Concert no. 2, in F minor, for piano and orchestra, op. 21 by Frédéric Chopin and Symphony no. 5, in E minor, op. 64 by Pyotr Ilyich Tchaikovsky. The soloist was pianist Elizabeth Sombart, and Adriana Winkler was the guest concertmaster. "Even if music is not a purpose itself, it is, I think, a privileged path, a ladder of light that allows us to access the true values of life, those that make man worthy of God," says pianist Elizabeth Sombart.

The recording of the concert from December 20th, 2018 can be listened to on the online channels of the "George Enescu" Philharmonic: website, on the Facebook page and on the YouTube channel.

The recording of the concert is broadcaston the Facebook page of Radio Romania Muzical on Thursday evening,

Conductor Camil Marinescu studied at the National University of Music in Bucharest in the bassoon class. He is a conductor of the masters Constantin Bugeanu, Cristian Mandeal, Mihai Brediceanu and Pierre Dervaux. He taught bassoon at the National University of Music in Bucharest and, for 10 years, held the position of resident conductor at the National Opera in Bucharest. Since 2003, for three seasons, he has been the permanent guest conductor of the Berliner SinfonieOrchester, Germany. Since 2002, Camil Marinescu has been a resident of Japan. Conducting both lyrical theater and symphonic repertoire, he was invited to conduct the Minneapolis Opera House in Minnesota (USA), the OSM Orchestra in Montreal, the Westdeutscher Rundfunk - Cologne, the KomischeOper in Berlin, the Mitteldeutscher Rundfunk in Leipzig. With some of these ensembles he made reference recordings: complete symphonic works by George Enescu, works by Janacek, Stravinsky, Bruckner, Mozart, Schubert, Beethoven, Debussy, Richard Strauss and Ravel. The conductor, who also carried out an intense pedagogical activity, included in his concerts Romanian music, contributing to the knowledge of our music all over the world. Camil Marinescu, former principal conductor of the "George Enescu" Philharmonic, passed away on July 27, 2020.

Born in Strasbourg, Elizabeth Sombart has Romanian roots, being the great-granddaughter of the great scientist Nicolae Leon, brother after mother with GrigoreAntipa. She began studying the piano at the age of six and made her public debut at the age of eleven. After winning the First National Prize for Piano and Chamber Music in her native country, she decided to leave France to study with masters such as Bruno Leonardo Gelber in Buenos Aires, Peter Feuchtwanger in London, Hilde Langler-Rühl in Vienna and Sergiu Celibidache at the Universityfrom Mainz, where she studied musical phenomenology for seven years.

From Carnegie Hall in New York to the Théâtre des Champs-Élysées in Paris, Elizabeth Sombart has performed in some of the most prestigious halls: Wigmore Hall (London), Concertgebouw (Amsterdam), Suntory Hall (Tokyo), Herkulessaal (Munich) and Palau of Music (Barcelona). Elizabeth Sombart also has an important discography (28 CDs) as well as two books translated into Romanian: Let the sounds become music and Music in the heart of fascination.In parallel with her solo work, Elizabeth Sombart created the Résonnance Foundation in Switzerland in 1998, which today is present in six other countries (France, Italy, Belgium, Romania, Spain and Lebanon).