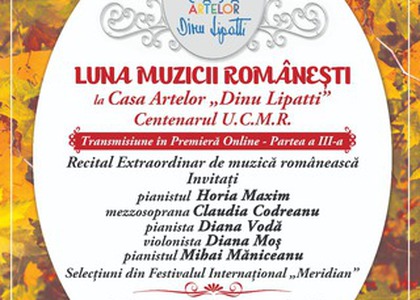 The Romanian Music Month at “DinuLipatti” House of Arts

In the third weekend, in which "Dinu Lipatti" House of Arts celebrates the centennial of existence of The Union of Romanian Composers and Musicologists, we offer you some selections from the Meridian International Festival, at "Dinu Lipatti" House of Arts. These selections consist of the 2018-2019 recordings of the festival, and come as an Extraordinary Recital of Romanian Music, in which you will be able to see again pianist Horia Maxim, mezzo-soprano Claudia Codreanu, violinist Diana Moș, along with composers and pianists Diana Vodă and Mihai Măniceanu, in the online premiere streamed on our Facebook page.

Pianist Horia Maxim started learning the piano at"George Enescu"National College of Music in Bucharest, under the guidance of Professor MirceaCostache. Later on, he graduated with Bachelor's and Master's degree from the National University of Music of Bucharest, having Delia Pavlovici and Dan Grigore as his professors of piano. Horia Maxim gave more than 500 recitals and concerts in the prestigious Halls of Asia, the North America, and Europe. He is currently a tenured professor at the National University of Music of Bucharest.

Mezzo-soprano Claudia Codreanu graduated from the National University of Music of Bucharest, in the class of Prof.GeorgetaStoleriu. She then attended master classes with Ileana Cotrubaș and Margarita Lilova in Vienne. Since 2012, Claudia has been collaborating with pianist Diana Vodă in recitals of appreciated compositions, less known to the general public, some of them in their absolute premiere. She is currently a PhD Associate Professor at the National University of Music of Bucharest, at the Department of Canto, and the coordinator of some cultural and educational projects, whose protagonists are the young lyrical performers.

Pianist Diana Vodă graduated from "George Enescu" National College of Arts, in the class of piano professor G. Enășescu, and from the Bucharest Academy of Music, in the composition class of Prof. Dan Constantinescu. In 2013 and 2016, she won the First Prize for the Lieder Creation of the Romanian Union of Composers and Musicologists. She is currently a PhD Associate Professor at the Department of Composition, at the National University of Music of Bucharest.

Violinist Diana Moș is a graduate of the National University of Music of Bucharest, the class of violin professor Daniel Podlovschi. She is currently the Chancellor of this institution, and university professor of Chamber Music. As a soloist, she has been involved in countless projects promoting the contemporary Romanian and universal music, being the founding member of the "Profil" Ensemble. She also made recordings issued on CDs, at the Romanian Radio Broadcasting Company and the Romanian Television.

Pianist Mihai Măniceanu studied the piano with ViniciuMoroianu, and composition with Dan Dediu, at the National University of Music of Bucharest. He had obtained several scholarships in Germany: Hamburg (2001), Bayreuth (2002), Leipzig (2003-2004), and received several awards: The Romanian Academy Award (2011), and two awards from The Union of Romanian Composers and Musicologists in 2011 and 2016. There are symphonic and chamber opuses among his creations, interpreted on national and international stages.

The programme of our invitees consists of a number of compositions created by DinuLipatti, Zeno Vancea, Valentin Gheorghiu, Cornel Țăranu, NicoaleBrânduș, NicolaeComan, and Mihai Murariu.

This month, "Dinu Lipatti" House of Arts is celebrating the centennial of existence of The Romanian Composers Society, which became The Union of Romanian Composers and Musicologists in 1949, and of which our spiritual mentor, pianist, composer, and schoolmaster DinuLipatti was part of. As a sign of appreciation and recognition, "Dinu Lipatti" House of Arts named November "The Month of Romanian Music". All the broadcast online premieres are dedicated to the Romanian composers and performers.

The "Meridian" International Festival at "Dinu Lipatti" House of Arts (2018-2019) was carried out in the partnership of The Union of Romanian Composers and Musicologists.

We look forward to seeing you on "Dinu Lipatti" House of Arts Facebook page - a Cultural Centre of Bucharest, which promotes the Romanian Classical Culture!