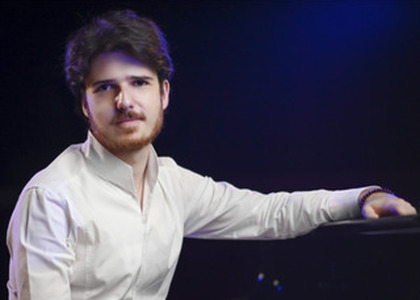 On Tuesday, the 24th of November, from 7.00 pm, on the youtube channel of the Philharmonic, on the Facebook of the "George Enescu" Philharmonic and on that of Radio Romania Muzical, the fourth concert without audience from the Season of Tuesday evening 2020- 2021 will be brodcasted.

Dimitri Malignan, winner at only 19 years old of the prestigious Prix Cortot 2017, impresses with his maturity, musical intelligence and his great sensitivity. Born in Paris in an original Romanian family, nephew of the composer Henry Mălineanu, Dimitri begins to study the piano at the age of 5 with the pianist Nicolas Horvath. His early talent is recognized by the renowned French pianist and teacher Jean-Paul Sevilla. The valuable guidance of this mentor will be decisive in his musical formation and evolution. In 2011, he was admitted to the class of Ludmila Berlinskaya, a disciple of pianist Sviatoslav Richter, at the Ecole Normale de Musique "A. Cortot" in Paris. From year to year, thanks to a deep and thorough study with his teacher, Dimitri obtains all the diplomas awarded by the Ecole Normale de Musique in Paris with the highest distinctions, culminating in 2017 with the concert diploma and the famous Prix Cortot, being until today today the youngest laureate.

He is perfecting at the conservatories in The Hague and Amsterdam with Naum Grubert, pianist and teacher with great experience of transmission at the level of piano excellence. Together with this great master, Dimitri continues the search for a perfect style and sound.

The young pianist is invited for the second time to perform during the Season on Tuesday night.