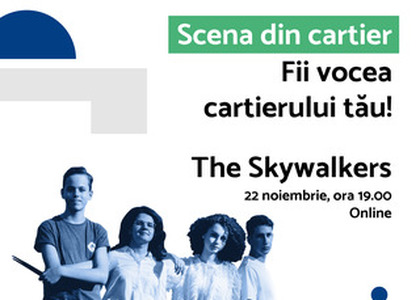 Independent musicians from Timisoara play in districts chosen by locals

Scena din cartier - local intervention project dedicated to the Timisoara independent sector - brings music to the districts voted by the people of Timisoara. The project debuted on November 14th with a concert by CLAR Band, and in the November 21th-22th weekend two other concerts will be held in the elected spaces: Leslie Wolf and The Groovemakers will perform in Ciarda Rosie, and the The Skywalkers in the Fabric district.

The project is carried out by the Trib'Art Association (Artistic Tribe) and benefits from a grant of 14.950 euros, thanks to the Active Citizens Fund Romania program, funded by Iceland, Liechtenstein and Norway through the 2014-2021 EEA Grants. The content of this bulletin does not necessarily represent the official position of the 2014-2021 EEA and Norwegian Grants; for more information visit www.eeagrants.org.

Vote for the stage in your neighbourhood!

On the project's official site, www.scenadincartier.ro, the people of Timisoara vote for the districts that can transform in a stage for a night. The over 30 musicians selected after the call at the beginning of the project will hold 10 concerts for 7 weeks, these interventions ending on December 19th. The call was meant for artists whose activity has been severly affected by the pandemic and who meet on of the three conditions: are not employed, have not obtained compensation or social assistance as of late and/or have not had any contractual commitments in recent times.

The interactive map, found on the www.scenadincartier.ro website, shows the top of the districts according to the votes of the locals, as the organizers opt weekly for the two districts that gathered the most votes from the public. Through the questionnaire based on which the public can vote for the next stage, the Artistic Tribe makes a map out of the musical preferences of the residents of Timisoara according to the area of residence of the voters. This information becomes valuable reference that the local music event organizers can use as guidance.

Although the interventions were initially designed as offline events with public participation, due to the new restrictions generated by the COVID-19 pandemic, they are broadcast online, via livestream, one several Facebook pages including: Radio Romania Muzical, Artistic Tribe, Best of Timisoara and others.

Leslie Wolf and The Groovemakers live in online concert on November 21th, 7 PM

*The concert is broadcast LIVE from the MorSound&co showroom, Ciarda Rosie district

FARKAS LÁSZLÓ, founding member and guitarist of the QUO VADIS group from Timisoara, collaborated for the first time with musicians Horațiu Silași (bass) and Gabriel Bot (drums) in the "Bluesnation" project, in 2012 and 2013, having several appearances at festivals such as: "Blues for Timisoara" (2013) and "Bluzău" (2013). In 2014, LACI FARKAS founded the blues-rock trio, together wuth Silviu Deda (drums) and Andrei Giulvezan (bass), naming it "LESLIE WOLF & THE GROOVEMAKERS", Leslie Wolf being his name translated in English. After a break of three years, he resumed the activity of his band, also in a trio formula, together with Gabriel and Horațiu. Their first concert appearance in this formula was in 2020 at the "Izolart" festival, followed by "Tușnad Gastro Blues", in September 2020. In addition to takeovers, most of them reworked, they also have their first own composition in the program: "Groove making song".

The Skywalkers live in online concert on November 22th, 7 PM

*The concert is broadcast LIVE from the European Capital of Culture's Faber Community, Fabric district

The Skywalkers is a band made up of four young musicians who bring in music full of message, energy and optimism. As a music style, the band falls into the rock genre with pop, soul and sometimes funk influences. They were founded in the summer of 2015, and the first Skywalkers concert took place at the Gărâna Folk Festival. In the meantime, they have taken the stage of important festivals and cultural events. They have written their own music from the start and because their songs were successful, they released their debut album in 2018 - "The way I feel". The song "Don't bring me down" was awarded at the Bega Music Festival 2020, Creation category.