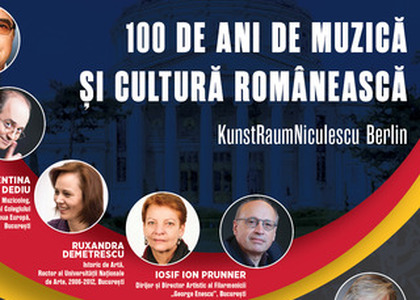 "Romanian Culture Days in Berlin", initiated by the Constantin Silvestri International Foundation and KunstRaumNiculescu-Berlin, with the support of the Romanian Embassy in the Federal Republic of Germany, is organized as a festival which takes place around the National Day of Romania, between the 25th of November and the 4th of December. The festival also marks the 100th anniversary of the founding of the Society of Romanian Composers (1920), today known as the Union of Romanian Composers and Musicologists. The event is incredibly significant for the Romanian culture: the approach that George Enescu took together with other Romanian composers in 1920 led to the birth of a Romanian national music school and to its integration in the context of European music composition schools.

The festival "Romanian Culture Days in Berlin", 2020 edition, includes four online events, with the participation of artists, Romanian and German cultural personalities who will hold conferences, debates, book launches, concerts. The events will be broadcast on the Facebook page of KunstRaumNiculescu Berlin (https://www.facebook.com/KunstRaum-Niculescu-106424581067546).

The festival "Romanian Culture Days in Berlin" wants through the "100 years of Romanian Music and Culture"eventto explore the most important cultural achievement that the Romanian artists and people of culture gave to their country and to Europe as well. The remembrance does not only aim at understanding the position that the Romanian culture has in the Universal Cultural Heritage (Fondul Cultural Universal), but especially at finding new solutions to promote the cultural and musical act, in a globalized and digitalized Europe, profoundly changedby the Covid-19 pandemic. The guests will be cultural personalities:Emil Hurezeanu, writer, journalist, Romanian ambassador in the Federal Republic of Germany, Dan Dediu, composer and professor at the National University of Music in Bucharest, rector of this institution between 2008-2016, Valentina SanduDediu, musicologist and professor, rector at the New Europe College, Bucharest, professor RuxandraDemetrescu, rector at the National University of Arts in Bucharest (2006-2012), Cristian Niculescu, concert pianist, the founder of the cultural organization KunstRaumNiculescu in Berlin.

Another personality will be Iosif Ion Prunner, conductor and pianist, the artistic director of the "George Enescu" Philharmonic.

The conference will take place via ZOOM:

The conference will end with a piano recital held by Cristian Niculescu.

MirceaCrtrescu, Romanian poet and writer, nominated for the Nobel Prize, needs no presentation, being the most famousrepresentative of contemporary Romanian literature. The new element brought by this book presentation is the debut, after 30 years, of a new volume of poems, volume for which, according to the authors own confession, he "longed for a long time". This event will be attended by the Romanian writer and translator (born in Banat), Ernest Wichner, director of Literaturhauses, Berlin (2003-2017). Loyal to the country he was born in, Ernest Wichner is the German translator of the most important Romanian contemporary writers: MirceaCrtrescu, Nora Iuga, Daniel Bnulescu, M.Blecher, VarujanVosganian, CtlinMihuleac etc. This event will also be attended by the actor Sabin Tambrea, born in Trgu Mure, yet who emigrated together with his family, at the age of four. The German actor of Romanian origin is today one of the best rated actors in Germany. The pianist Cristian Niculescu will host the conference held at KunstRaumNiculescu Berlin.

OanaChiu is a Romanian musician who, in addition to her musical talent and unmistakable voice, has been working for years to discover and present the formidable essence of the Romanian interwar music.

Her repertoire includes, first of all, music from the interwar Bucharest. A series of musical sessions with different Romanian and international artists led to Bucharest Tango, a CD and project that sent Oanaon stages of Singapore, Lithuania, Austria, Poland, Hungary, Switzerland, Sweden, Belgium, Russia and Germany. She signed with the Asphalt Tango record company (which represents, among many others,FanfareCiocarlia) and in 2013 she continued the Romanian nostalgic story, through the album Divine, dedicated to Maria Tnase. The release of the album marked 100 years since the great singer was born.

Maria Tnase, emblematic artist of the Romanian folk culture, does not cease to be today, more than a century after her departure, a national "brand" and the most famous singer for this type of music that our country ever gave.

The exhibition, curated by the historian and art historian Cristina Enescu, presents little-known aspects of the singer's life, life which represented the object of a rich bibliography that the curator used, following all the rules of such a presentation. For the exhibition to become interactive, everything will be presented on the plasmas in the concert hall. The concert and the exhibition will take place atKunstRaumNiculescu Berlin.

This event intends to pay homage to our great composer George Enescu, about whom Constantin Briloiu, the founder of the Society of Romanian Composers (1920) said: "Through Enescu, the Romanian music will rise to universality". These had been prophetic words since the debut of the composition Oedip marked the final entry of the Romanian composer into the great family of the European music of the 20th century.

The chamber concert held under the auspices of "Romanian Culture Days in Berlin" will take place in the same well-known place of culture in Berlin, KunstRaumNiculescu, and will include works by George Enescu and Maurice Ravel.

The choice of the composer Maurice Ravel is not at random and is due to the close relation that the two artists had throughout their lives. The performers of the chamber music programme will be Romanian musicians, as well as international ones, strongly attached to Romanian music, but especially to the great composer George Enescu.