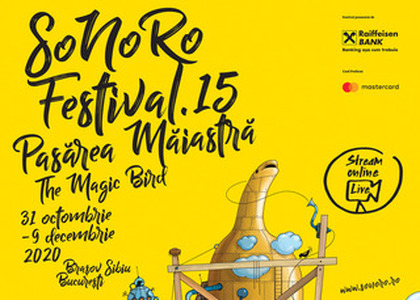 The 15th Festival SoNoRo ‘Masterly Bird’ comes back in Bucharest, between November 28th and December 9th

The 15th Festival SoNoRo 'Masterly Bird' comes backwith a new series of concerts broadcasted live from some of the most beautiful museums and private historical residences from Bucharest, in the period between November 28th and December 9th

The concerts that open the second part of the SoNoRo Festival, entitled The Sleeping Muse (November 28th) and the Table of Silence (November 29th), are inspired by the work of Constantin Brâncuși.To the live broadcasts of the concerts will be added images of a selection of photos made by Brâncuși and posters of his most important exhibitions, exposed in the DADA Gallery in Bucharest, as well as images filmed by the Romanian sculptor in his workshop, which weredesigned last year at the BOZAR exhibition, within the Europalia International Festival.

"We were very happy with the enthusiasm with which the audience received the first concerts and the large number of listeners who attended the concerts broadcast live from the concert halls in Brașov and Sibiu, on the platforms of SoNoRo and those of our partners. Even if we had to invite our listeners only in the virtual concert hall, this year, we wanted to keep the concert outfit and we tried to offer a truly anniversary edition, with a very rich repertoire and exceptional performances, in a format adapted to the online environment We thank all those who have been with us, those who have supported us through donations and given us encouragement, all of which have given us the energy and inspiration with which we prepared the second part of the SoNoRo Festival. We hope to have you close by in the next period, every night, at every concert, and let the emotion of the music reconnect us. " - RăzvanPopovici, Executive Director of the SoNoRo Festival.

"We are glad that we were able to bring all these extraordinary musicians together in Bucharest during this difficult period and that we were able to develop a complex musical program with a captivating repertoire. Involuntarily, the choice of musical works reflects our inner feelings, manifested in concerts with titles such as The Phoenix - Singing in the Dark (December 1st), How to Be Free (December 4th), The Birdcage (December 5th) or Borderless (December 6th). Each concert tells a story, conveys a message, illustrates stages in the history of music, the greatness of an era, its disappearance and the emergence of new generations, reborn from the ashes of previous eras. This is the message we want to convey, that is why we have made every effort to reach the public this year, by any means, to fulfill our mission as artists, to transmit hope and joy. " - Diana Ketler, Artistic Director of the SoNoRo Festival.

The online broadcasted concerts are free to access on SoNoRo's own platforms and on their partners'. Those who want to honor the work of the artists, can do it through a donation directed toward Sonoro Association: https://sonoro.ro/donatie/.