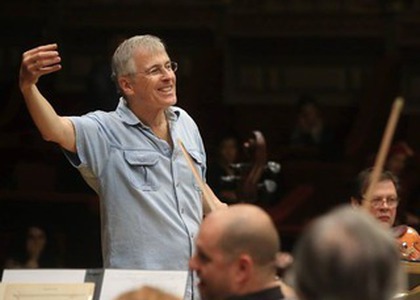 The 'George Enescu' Philharmonic Choir celebrates 70 years of online season, next to the pianist and conductor Christian Zacharias

On Thursday, 26th of November 2020, at 7 o'clock, a new recording of one concert will be transmitted live on the online sites, leaded by the famous german pianist and conductor, honorary director of the institution, Christian Zacharias, along with the participation of "George Enescu" Philharmonic Choir, which celebrates 70 years of existence.

The program of this week's concert, recorded on the 13th of April 2018, whose conductor and lead singerisChristian Zacharias consisted of the masterpieces of some great composers: Nanie, The destiny song by Johannes Brahms, Introduction and Allegro appassionato for piano and orchestra by Robert Schumann and Symphony no. 3 in A minor, 56, The Scottish by Felix Mendelssohn.

On the 1st of December, the "George Enescu" Philharmonic Choir celebrates its 70s anniversary since the assembly was formed under the directorship of Constantin Silvestri, which lately it has become one of the best assembly of Europe. We are all happy to celebrate 70 years of the choir's existence. The collaborations with some of the world's orchestras, including The Berlin Philharmonic, French National Orchestra, London Symphony Orchestra, but also the permanent presence alongside the "George Enescu" Philharmonic Orchestra were prestigious successes of its work. The participation of some valuable musicians like Zubin Mehta, Daniel Barenboim, Kiril Petrenko, Lawrence Fosterbrought the honour to the artists of this assembly and the vastness and diversity of its repertoire that has always attracted the audience applause. Thursday evening you will hear two works of Brahms, that are perfomed by the stick of the famous master Christian Zacharias. We hope to enjoy again as soon as possible of the audience' warmth from the Romanian Atheneum, said Iosif Ion Prunner, the one who is in charge of the "George Enescu" Philharmonic Choir now.

The Symponical Orchestra and the "George Enescu" Philharmonic Choir

Introduction and Allegro appassionato for piano and orchestra, op. 92

The recording of the concert could be listened online on The George Enescu Philharmonic sites: site (https://www.fge.org.ro/), on Facebook (https://www.facebook.com/filarmonica.george.enescu/) and on YouTube (https://bit.ly/2wMctlw).

The recording of the event is perfomed on Radio Romania Musical Facebook page:(https://www.facebook.com/Radio-Rom%C3%A2nia-Muzical-227784404990).