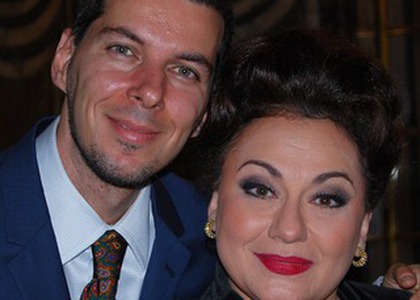 Marius Constantinescu in dialogue with the soprano Leontina Văduva

Fundaţia Calea Victoriei and Marius Constantinescu are inviting you to an event meeting with one of the most beloved, touching and charming opera performers: soprano Leontina Văduva.

Not long after her birthday, you will have the chance to participate in a dialogue that may charm you instantly and in which you will discover why everybody admires LeontinaVăduva: sensitivity, naturalness, generosity and a warmth that wrap you from the very first moments.

Episodes of a brilliant career and little-known stories from the journey of a world elite artist - these and not only that will fill your quiet Friday night.

Leontina Văduva is one of the leading sopranos of the world in decades.She studied at the Bucharest Conservatory with the formidable Arta Florescu. After winning the Toulouse International Singing Competition, she began her international career in the late 1980s.The title role in "Manon" by Jules Massenet opened her the way to the most important stages of the world and brought her the Laurence Olivier Award in Great Britain, after her debut at the Royal Opera House Covent Garden."Romeo and Juliet", "La Bohème ", "Carmen", "The Tales of Hoffmann", "Faust", "Dialogues of the Carmelites " were other titles of the lyrical repertoire in which LeontinaVăduva shined in Paris, Milan, New York, Barcelona, Frankfurt, Turin, Chicago or Tokyo.

Today, Leontina Văduva is a singing teacher at the Claude Debussy Conservatory in Paris and at the Haute Ecole de Musique in Lausanne.

Last but not least, you will have the opportunity to enter into a dialogue with LeontinaVăduva and ask her questions.