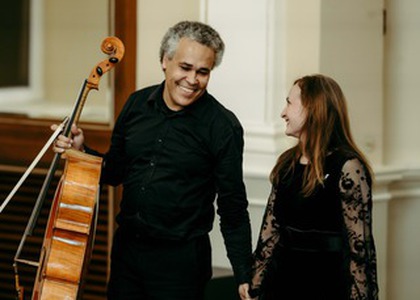 250 of art pieces signed Andrei Pandea, one for each year since the birth of the composer Ludwig van Beethoven, will form the symbolic public of the online concert "ATINS prin muzică // Beethoven // Testament",with which the cellist Makcim Fernandez Samodaiev and the pianist Monica Florescu end the year 2020 from the fifth Chamber Season "Florescu-Fernandez &Friends". The concert will take place on Friday, December 4th, starting with 7 p.m. in Sala Oglinzilor of the German Forum from Sibiu, with a live broadcast on the Facebook page "Florescu-Fernandez &Friends".

During the concert, the audience will have the chance to listen to the last two sonatas for cello and piano op. 102, composed by Ludwig van Beethoven and "Heiligenstadt Testament", a letter addressed by the composer to his brothers, in a difficult time of his life, recited during the event on December 4th by the actor Pali Vecsei from Sibiu.

The initiative of the two musicians completes the offer of cultural events dedicated to the composer's personality by philharmonics around the world, on the occasion of the Beethoven anniversary and the celebration of the 250th anniversary of his birth, and the event is supported by the German Forum Sibiu, through the Department for Interethnic Relations.