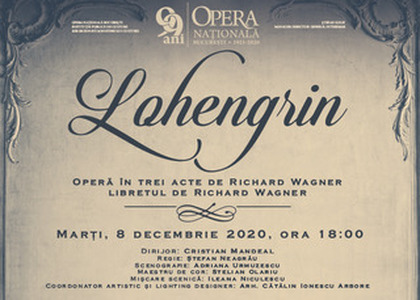 The country's first lyrical scene will celebrate 99 years since its institutionalization on the 8thDecember, 2020, and this year all fans of classical music are invited to celebrate by attending the premiere of the opera performance "Lohengrin" (2011) online, starting at 6 pm. The masterpiece bears the mark of Richard Wagner and will be cast by the illustrious Ștefan Neagrău, part of the #DordeONB (translated as #MissingONB) project of the "Opera Online" series.

The performance will be available on the official site of the institution, by following the link:https://operanb.ro/operaonline/And on the Opera House's YouTube channel:https://www.youtube.com/OperaNationalaBucurestiONB

The choosing of the title is not by chance, as on the 8th of December 1921, by decree of the Ministry of Arts, the poet Octavian Goga, the Opera private society became a state institution,he adquartered at The Lyrical Theater "Leon Popescu", which was first under the directorial leadership of Scarlat Cocorăscu. The new "Romanian Opera House" institution was inaugurated with the opera performance "Lohengrin" by Richard Wagner, conducted by the greatest Romanian composer, George Enescu. Over time, the stage of the national opera house has seen precisely 20 representations of the opening title.

On this occasion, we are also inviting you to visit the official Facebook page of the Bucharest National Opera and watch the story of the inauguration through a video montage with pictures from the archive of the country's first lyrical scene, on Tuesday, 8th December 2020.