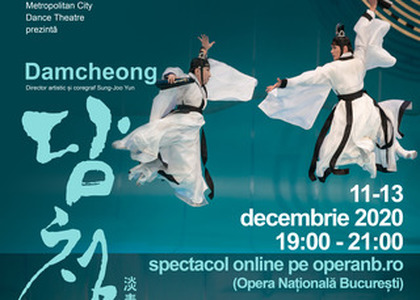 In celebration of the 30th anniversary of the diplomatic ties between the Republic of Korea and Romania, the Embassy of the Republic of Korea in Romania, together with the Incheon Metropolitan City Dance Theatre (IMDT) and the Bucharest National Opera House, invites you to enjoy three magical nights with "Damcheong" - a Korean dance performance, which will be streamed online during the weekend of December 11th-13th, beginning at 7 PM, on the official website or the YouTube channel of the Bucharest National Opera House.

"Damcheong" - translated as the "Celadon" colour of the porcelain - has countless shades of green and blue, which is found in the traditional pottery produced in the Korean Peninsula. "Damcheong" reflects the spirit of the traditional Korean dance, through imagery derived from the varieties of the traditional Korean lifestyle. The choreography by the Artistic Director Sung-Joo Yun is a masterful mix of the old and new, where each act transposes the audience into a new journey, through the traditions of the palace, folklore, agriculture and religion, in search of the roots of Korean dance. Mrs Yun is a master of traditional dances, renowned for her exceptional talent of creating original works such as "Manchan - Jin, O-gui" ("Feast") (2017), "Bi-ga" ("Lamentation") (2018) and "Damcheong" (2019), which have enjoyed great international appreciation.

The dance performance is recorded, includes Romanian subtitles, and is available online, for free, to anyone interested in following the Korean traditions for two consecutive hours. The "Damcheong" dance performance will be streamed online (available ONLY for the duration of the performance) on the website and the official YouTube channel of the Bucharest National Opera House, for free consecutive days, from Friday, December 11th to Sunday, December 13th, at 7 PM.

The Official You Tube channel: https://www.youtube.com/channel/UClYu9GLWIYTpcZQH34Qzllw