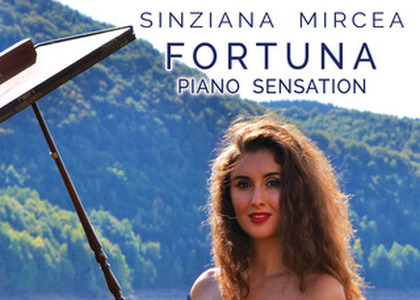 Sinziana Mircea, a world-renowned pianist whose track record includes tours in countries such as China, Japan and the United States of America, released today the album "Fortuna - Piano Sensation". This time, the musician presents herself to her audience both as a performer and as a composer, this being her first author-album (author's album).

The album "Fortuna - Piano Sensation" suggests a series of 15 compositions by Sînziana Mircea on famous themes from classical music such as Carmina Burana, by Carl Orff, or works inspired by the music of Chopin, Bach or Handel. The album features live recordings from the Stockholm Philharmonic concert, as well as studio recordings made at the legendary Electrecord Records.

"We are very excited to give-wings-to this young pianist who started on the path of composition for the first time with Electrecord.In fact, this is the first album made by a Romanian pianist as a performer and composer, after more than 30 years, released at our record label. We are proud to mention that recordings made by George Enescu and DinuLipatti, with the interpretation of their own compositions, were first published on Electrecord, in the middle of the 20th century.Hence, there is a long tradition which we are happy to continue in 2020 through projects such as SînzianaMircea's album ", said Mrs. Cornelia Andreescu, General Manager of Electrecord.

The validation of the pianist's compositions was granted this year by BBC Radio3, which broadcast some of the songs via the European Radio Union in a show watched by more than a million listeners in thirteen countries. Two compositions were made within the Brătianu Scholarship granted by the Ministry of Culture in the first series of 2020.Sînziana Mircea's compositions propose to the listener unique arrangements made for piano, guitar, soprano, as well as for 2 or 3 pianos. The guests of the pianist Sînziana Mircea are the guitarist Raisa Mihai, as a performer and co-author, as well as the soprano Amalia Lazarciuc. The release of the album was preceded by the launch of a series of 4 videos, filmed entirely in Romania and made by Dan Gherghiceanu / AeroView, with the support of the National Museum of Art of Romania. The audio recordings were coordinated by the sound engineer Dan Corjos.

The concert at the Stockholm Philharmonic took place in 2019, being organized by the Romanian Cultural Institute in Stockholm and the Romanian Embassy in Sweden on the occasion of Romania's National Day. The author chose to present songs from that concert in the album to bring to the listener's attention the warm and emotional atmosphere of the concert hall in the difficult context of 2020, when the concerts were suspended due to the pandemic.

Sînziana Mircea said: "It is a new experience for me and I am very happy to share it with you and to present you the variations for piano on famous themes from classical music.The inspiration for this journey comes from an old tradition in which composers used each other's themes as a starting point for new pieces, thus revealing new horizons.There is evidence of this, no one other than J.S. Bach and his famous piano version of emotional Adagio for the oboe and orchestra, composed by his Italian contemporary Alessandro Marcello".

The album is available in the Electrecord store, on the Emag.ro platform as well as in Cărturești. It will be distributed in the main bookstore chains, and in digital format it will be available on the principal streaming platforms, including iTunes and Spotify. You can listen some of the pieces from the album on the pianist's Youtube channel and you can watch the video of Fortuna here . All the pieces from the album are presented in the attached album's Booklet.