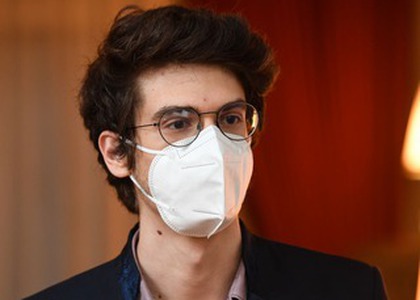 The "Quoting Beethoven" contest challenged music lovers and young artists to take inspiration from, reinterpret and update the work of the top"star" of classical music. The competition was organized on the occasion of the 250th anniversary of the birth of Ludwig van Beethoven (December 17), by Goethe-Institut Bucharest, the Austrian Cultural Forum Bucharest, Sound Week and the National University of Music Bucharest, in partnership with CIMEC. ro and with the German Cultural Centers in Brasov, Sibiu and Timisoara. The documentary stay in Vienna is organized in partnership with the Österreichisch-Rumänische Gesellschaft (Austrian-Romanian Society) in Austria.

"I'm truly happy that my work for bassoon and piano, 'Ludwigorous', was one of the pieces highly valued by the jury. From what I've learned, there have been a lot of entries in this competition, which I think is a great thing. I warmly welcome the special initiative of the Goethe Institute and the Austrian Cultural Forum to organize this contest, especially now, in the last days of 2020, in which we celebrate 250 years since the birth of the great composer Ludwig van Beethoven. I also want to congratulate the other awarded competitors", said the composer Andrei Petrache, thanking the jury and the Austrian Cultural Forum for the special prize.

The work "Ludwigorous" is not just a playful reinterpretation of some famous themes of the Weimar Titan, explains the young creator. "You can recognize various quotes from Beethoven's creation in my work, various references, but in a metamorphosed manner. I tried to create a proclamatory world that opens from the Beethoven ethos to the stylistics of post-modernism of 2020. In other words, I saw myself as an anonymous contemporary of Beethoven. I am writing music now with the compositional tools and a way of thinking that resembles those times"explains Andrei Petrache.

Born in 1998, Andrei Petrache is a pianist and composer. Coming from a family of musicians, Andrei Petrache studied piano in the class of Mrs. Ileana Busuioc from the "G. Enescu" National College of Music in Bucharest, but also approached several auxiliary instruments, such as guitar, flute, double bass and percussion. He has won over 30 awards at national and international piano competitions.He is a constant presence on concert stages in Romania, with solo piano recitals. The pianist Andrei Petrache alsogets better and better, being part of some jazz or world music bands (Les éléphants bizarres, RVQ, etc.). He is one of the top young musicians of the moment.

Andrei Petrache is also a fourth year student at the National University of Music in Bucharest, specializing in Classical Composition, in the class of professor and composer Dan Dediu. Moreover, he is in his first year in Orchestral Conducting at the same University, under the guidance of professor and conductor Petru Andriesei. Andrei Petrache has written over 40 works so far, covering both vocal and instrumental genres, as well as electronic music. His works have been awarded in various national and international composition competitions. They have been performed in concerts and festivals in Bucharest, Timișoara, Pitești, Sibiu, Cluj-Napoca, Moscow, Paris, Hanover, Jerusalem, London, Cambridge, Brussels, Wenduine, Zeerbrugge.

The organizers intend to present the winning works in an event that will take place some time next year, as soon as the sanitary conditions allow it.