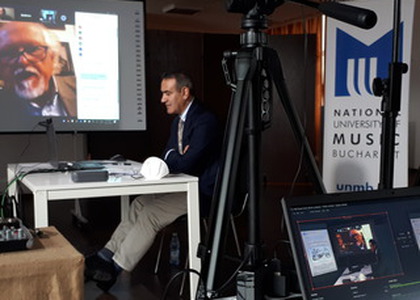 The inauguration of the Centre for Nineteenth-Century Music Studies (CNCMS), held during the middle of December 2020 at the National University of Music in Bucharest is an event that highlights online as well as offline the results of sustained work held over the course of several months. The event was coordinated by musicologist Nicolae Gheorghiță, prorector of research and international relations and director of the Department of Research, Innovation and Information (DRII) from the National University of Music in Bucharest.The entire artistic and academic worlds are facing great difficulties regarding adaptation and reinvention in these troubling times. As such, CNCMS aims to assist in the consolidation of international research communities by creating and managing highly valuable scientific and educational collaborations in the field of music.

The Centre (https://unmb.ro/cncms) offers a digital fund to its members, partners and collaborators, students and the academic community of the National University of music in Bucharest. This fund covers books, musical scores and manuscripts and a bibliographic database which contains over 6000 titles and reference documents for Romanian and International cultural music of the nineteenth-century.The Centre for Nineteenth-Century Music Studies (CNCMS) is a unit of research and development of specialisations created through the Institutional Development Fund (IDF) project in 2020, with the goal of improving the research capability of the Doctoral School and of the Department of Research, Innovation and Information (DRII) from the National University of Music in Bucharest.

In just 8 months, the foundation of an institutional platform has been set. It seeks to promote cutting-edge research in the field of music and other related studies that focus on the nineteenth-century, with the scientific and educational cooperation of partners both within the country and abroad.

CNCMS was conceptualized in order to raise our research standards within the field to those of the Occident: no university or department of research within central or eastern Europe (including Romania) had a focus on the study of nineteenth-century music. The only consortium of such nature in Europe was enacted by Durham University and the partnership includes 5 other institutions: The Centre for nineteenth-century History (Sorbonne), University of Birmingham, Aarhus University - Denmark, McGill University - Canada and Monash University - Australia. In November of 2019, the director of the consortium, professor Bennett Zon appeared at the conference organized by The National University of Music in Bucharest, Elites and their musics. Soon after, in 2020, Rector and University Doctor Diana Moş was invited to adhere to the consortium of the 6 universities that study nineteenth-century music. CNCMS is the system that facilitates access to this important field of research.

Projects carried out by UNMB in the last three years have played an important role. The musicology and ethnomusicology conferences organized by DRII and the Doctoral School during last year's autumn were especially important (Musical and cultural osmoses in the Balkans - www.ims2019bucharest.ro; Elites and their musics. Music and Music-Making in the 19th-Century South-Eastern Europe Salons, project financed via the National Council for the Financing of Higher Education - International Development Fund). Those projects, along with numerous thematic debates with over 180 specialists attending the events from 23 countries, have pointed out the imperative need of establishing CNCMS in this part of Europe.

The inauguration of the CNCMS and the closure of the project carried out by UNMB this year have been marked through an international interdisciplinary conference held online during the 10th and 11th of December 2020. It was titled: Music, Multiculturality and Sociability in the 19th Century Central and South-Eastern European Salons. The conference discussed the defining impact of the occidental salon and its musics on the similar institution from Central Europe and the Balkans. The elites from these areas in the 19th century longed to synchronize their preferences with those of the Occident. This provided one of the most essential instruments with which they could drift towards modernity. The aforementioned salons and their musics heavily influenced the transfer and the construction of social and cultural identity of the elites. 16 guests from 7 countries have participated in the conference and keynote speakers includeWalter Zev Feldman - Senior Researcher of the New York University, Abu Dhabi, BennettZon - director of the Centre for Nineteenth-Century Studies consortium in Durham University and RalfMartinJager from the Institute of Musicology from the Westphalian Wilhelms - University of Münster

One of the main goals of CNCMS consists in the creation of a network of international collaboration. This would offer PhD students and the teaching and research staff from The National University of Music in Bucharest scientific resources and management expertise regarding the initialization and enacting of interdisciplinary projects with 19th century music as the subject at a national and international level. In this manner, no less than 16 partnerships with prestigious institutions in Romania as well as abroad have been finalized: The Academy of Arts - University in Novi Sad, The National Library of Romania, The Romanian Academy Library, The Academy of Science and Arts in Croatia, The National Museum "George Enescu", History of Art Institute "George Oprescu" (Romanian Academy), National Academy of Music "Gheorghe Dima" in Cluj-Napoca, Institute of South-East European Studies of the Romanian Academy, The Centre of Musical Performance and Research of the Ottoman Era (University of Istanbul), The Center for the Study of Sociology and Musical Aesthetics (CSSMA) - Lisbon, The National and Kapodistrian University of Athens, The "George Enescu" National University of Arts in Iași, New Europe College, Romanian Musical Performing and Mechanical Rights Society, University of Bucharest, The Association for the Royal Heritage of Peles supported by the Royal Family of Romania.

The partnership with the Association for the Royal Heritage of Peles was actually signed during the Inauguration Conference of CNCMS on the 10th of December for a reunion hosted by the National University of Music in Bucharest.

Finally yet importantly, regarding the CNCMS project, two publications have been edited: Symphony no. IV by George Enescu (finished by Pascal Bentoiu) made its debut in an edition with a bilingual preface by The Publishing House of UMNB. (https://unmb.ro/cncms/publicatii/simfonia-nr-4-g-enescu/), with an introductory study by Dan Dedium. The collective volume, which unites Music from the 19th century Balkan salons, is scheduled to be released by this publishing house.