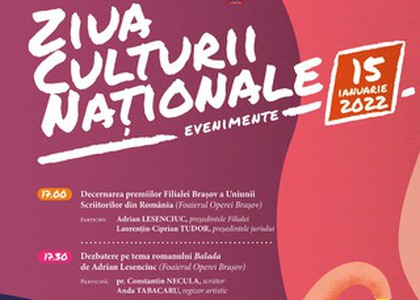 On Saturday, January 15th, 2022, at 6.30 pm, in the Opera Hall, we invite you to enjoy a very loved and very popular Romanian work: "Crai Nou", composed by Ciprian Porumbescu, on the text of the play by the poet VasileAlecsandri. Brașov is linked to the absolute premiere of this operetta, which took place on February 27th, 1882, in the Festive Hall of the Romanian Gymnasium (today the "Andrei Șaguna" National College), on an improvised stage. Here we mark an anniversary moment: 140 years since the premiere of the play!

The operetta combines joy with poetry in an extremely tonic Romanian atmosphere and develops a popular myth that says that the new moon can bring happiness to those in love. The play is, in fact, a joke, in which a steward is tricked by two youngsters, helped by the mountain peasants. Anica, this steward's niece, and Leonaș run away from home to get married, but they are wanted by the steward and the gendarmes. Defended by Dochița andThe old man Corbu, they manage to hide so that, in the end, the steward can get them engaged. The cast consists of: the soloists of the Brașov Opera: Maria Catrina - Anica, Mădălina Bourceanu - Dochița, Dan Popescu- The old man Corbu, Alexandru Aghenie - Bujor, Mihai Irimia - Leonaș, Lorand Cristian - the steward. Ballet soloists: Chisako Ota, Dorin Mirea and The Braşov Opera Orchestra, Choir and Ballet. Maestro Mircea Holiartoc will be at the rostrum of the Brașov Opera Orchestra. The artistic direction is made by Anda Tabacaru. Scenography: Rodica Garștea. Choir conductor: Dragoș-Mihai Cohal. Choreography: Nermina Damian. Choreography assistant: Ramona Mezei. Assistant director: Silvia Papadopoulos. Stage director: Dan Antipa.

On the same day, from 5.00 pm, in the Foyer of the Brașov Opera, the awards ceremony of the Brașov Branch of the Romanian Writers' Union takes place. Participants: Adrian Lesenciuc, the president of the Brasov Branch and Laurențiu-Ciprian Tudor, the president of the jury. Every year, the Brașov Branch of the Romanian Writers' Union awards, after judging, the Opera Omnia Prize, Book of the Year Prize and Debut Prize for the most representative literary works. The jury of this edition was composed of the writers: Laurențiu-Ciprian Tudor (president), Daniela Șontică, CameliaCrăciun and Carmen Gheorghe (Brașov branch of the Writers 'Union),Violeta Savu (Bacău branch of the Writers' Union). Following this event, from 5.30 pm, also in the Foyer of the Opera, there will be a debate on the novel "Balada" by Adrian Lesenciuc, which will be addressed by the priest Constantin Necula, writer and Anda Tabacaru, artistic director. "When the most beautiful love story does not have Romeo and Juliet as protagonists, but the great composer Ciprian Porumbescu and his lover, Berta, when the sad biblical story of the righteous Job who loses almost everything but does not lose his soul , is repeated, with the priest Iraclie, the father of Ciprian, in the role of the holy figure, when history, power, greed and religion plot against the people, but Ciprian and his father Iraclie remain worthy and undefeated, their story is more than fiction. Based on the biography of the Porumbescu family, with two central characters, Iraclie and Ciprian, the novel "Balada" is disturbing by the purity of love and dignity that overcomes differences, discrimination, abuse ", confesses Adrian Lesenciuc, author of" Balada ".

Tickets for the operetta show "Crai Nou", as well as for the rest of the events of the Brașov Opera in January are on sale on Wednesday, January 5th, 2022, at 10.00, both online, on the website www.bilet.ro, and at the Brașov Opera-Bisericii Române street no. 51. Cashier Schedule: Monday - Friday 10 - 17 and one hour before the start of the shows (if tickets remain available).

In the 2021-2022 season, children's access to opera and operetta performances is allowed from the age of 7!

Participation in the events of the Brașov Opera is allowed for people who are vaccinated against the SARS-CoV-2 virus and for whom 10 days have passed since the completion of the complete vaccination schedule, for people who are in the period between the 15th and 180 days after confirmation of SARS-CoV-2 virus infection, respectively for persons who test negative for an RT-PCR test for SARSCoV-2 virus infection not older than 72 hours or for a rapid antigen test for infection with SARSCoV-2 virus not older than 48 hours - under the conditions established by the joint order of the Minister of Culture and the Minister of Health, issued pursuant to art. 44 and of art. 71 para. (2) of Law no. 55/2020, with subsequent amendments and completions. The green certificate will be accompanied by an identity card.

The performances are allowed according to the legal regulations in force with the participation of the public up to 50% of the maximum capacity of the hall.

Throughout the performances, wearing a mask is mandatory! The spacing between the seats will be observed. If you have symptoms of a respiratory infection, please stay home so as not to endanger yourself or the other participants in the event. Thank you for understanding!

Events held with the support of Brașov City Hall