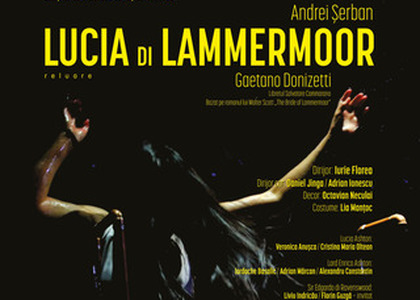 "Lucia can evoke passion, disgust, sadness, happiness, fury, but at the same time I wanted to evoke the sensation that the ideal is not for the future but for the present, that way inside the theatre we can feel what it means to be one hundred percent human", Andrei Serban stated regarding the debut of "Lucia di Lammermoor" by Gaetano Donizetti in Bucharest.

"Lucia di Lammermoor" by Donizetti is a masterpiece of Italian romanticism, one of the greatest Bel canto works.

Based on the novel by Walter Scott "Bride of Lammermoor", Donizetti's opera tells the turbulent love story of Lucia. When the curtain rises, we discover a training room where soldiers work out, getting ready for battle. Two parties are in conflict. Enrico learns that his sister Lucia is in love with Edgardo, the mortal enemy of his family. The time of political and economic crisis is at hand, the troops need money and in order to obtain it, Enrico has only one option: to have Lucia Marry the magnateArturo.

Waiting for the secret rendezvous with Edgardo, Lucia informs Alisa, her chaperone, of a foreboding nightmare, but ignores the warning convinced that her love shall triumph. The lovers get engaged in an improvised ceremony, before Edgardo can leave on a mission as his decision to enact vengeance against the family remained firm.

Without any word from her beloved, as her letters were intercepted, Lucia is convinced that she was abandoned. Like a manipulated puppet, Lucia is forced to obey her brother's wishes. The marriage takes place, but just when Enrico forces her to sign the marriage contract in the presence of the priest Raimondo and of the choir reunited for the ceremony, Edgardo appears out of nowhere. He calls Lucia a traitor, he humiliates her and calls off their engagement, cursing her.At night, thecelebrations following the marriage are in full swing, meanwhile Lucia not only feels abandoned by the one she loves, but also feels treated as a mere means to an end for selfish, political and military purposes. Desperate and vulnerable, crime remains her only means of defending herself. Raimondo halts the night's festivities and announces that Lucia murdered her husband.

As soon as she is freed from all burdens, Lucia sings one of the most delicate and long arias in the history of operas, the aria of "madness". In the final scene, Edgardo returns furious and hurt, falsely believing that Lucia is spending the marriage night in the arms of her husband. The bell of the dead rings. Raimondo informs him that Lucia passed away. Learning the truth, Edgardo takes his own life, convinced that this way he shall reunite with his beloved.

A stellar figure of the Bel canto, Gaetano Donizetti was a child prodigy, having earned a scholarship at the young age of 9 at the prestigious LezioniCaritatevoli School of Bergamo.As his works had become so well known to the public, he was exempted from serving in the military in order to dedicate himself to music and had a prolific career: 75 operas and 19 symphonies among others, but with a tumultuous life that ended in tragedy. Perhaps this is the reason why the sheer,almost unearthly intensity of the emotions and extreme experiences of the characters echo the sounds of a struggling life.

Tickets are available here: http://tickets.operanb.ro/ and at the Bucharest National Opera Ticket Booth.

And as we all wish to look out for our health, we invite you to consult the show's participation rules available on the institution's site via: https://operanb.ro/regulament-de-participare-la-spectacole/