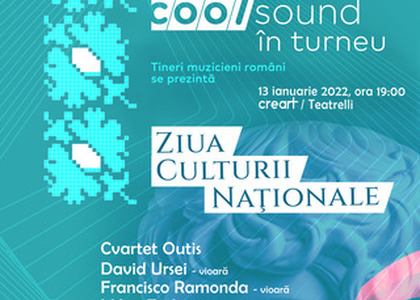 COOLsound on tour - Young Romanian Musicians Appear is a concert that will take place at Teatrelli (Piața Alexandru Lahovari no. 7) on National Culture Day, on January 13th at 7PM. This is the preamble tothe young artists' tourwhich will be held at the Dubai World Expo - Expo 2020 between January 15th and February 15th. The project is developed by the Bucharest National Music University in collaboration with CREART - the Bucharest Centre for Creation, Art and Tradition, and the concept was proposed by the Pro Contemporania Cultural Association.

COOLsoundaims to present the always surprising ways in which young artists understand artistic performance, and to bring to light, for audiences of all ages, the innovative methods through which the Romanian youth reaches high levels of artistic performance.

The schedule will encompass brave approaches and fresh perspectives on popular pieces from national and international repertoire which will be performed at the Bucharest event, followed by the performance at the Dubai 2020 Expo.

Outis Quartet will be performing Romanian popular pieces arranged for the string quartet, and Outis members alongside pianist IulianOchescu will be playing BélaBartók - Six Romanian Dances for Violin and Piano, George Enescu - excerpts from Suite for Piano Solo op. 10 in G Major and Paul Constantinescu - Old Song for Cello and Piano. The evening will continue with a programme by MădălinaPetre - guitar and ȘtefanDiaconu-flute with excerpts by Heitor Villa-Lobos, Astor Piazzolla and Leo Brower.

The concert promises a surprising ending, as Mădălina Petre will appear not only as guitarist, but also as vocalist next to flautist Ștefan Diaconu and pianist Andrei Petrache. The trio will be interpreting signature pieces from Romanian repertoire such as Richard Oschanitzky's Our Love is a Violin Johnny Răducanu's October (lyrics and arrangement by Mădălina Petre), Inimă nu fi de piatră by Edmond Deda, Titel Popovici's Iubireanoastră nu are apus, Radu Teodorescu's Mână birjar and Aura Urziceanu's Dor de viață.

These young artists' tour at the Dubai 2020 Expo will strengthen Romania's representation and give it a distinct and memorable colour within this worldwide project, where almost 200 nations have brought their most representative contributions.

The January 13th concert at Teatrelli is a sign of hope and trust in the future, and belief that music can generate optimism and transform destinies.