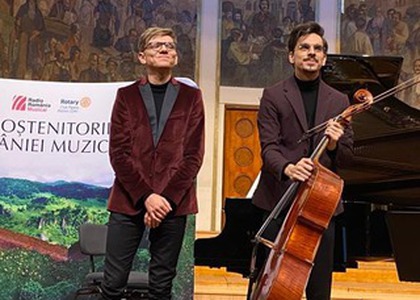 Musical Romania's Heirs in a recital in Cluj-Napoca

On Saturday, 8th of January, a large and enthusiastic audience attended the recital that opened the "Musical Romania's Heirs" Tour in the Auditorium Maximum in Cluj, a tour supported by the scholarship winners of the same name: the pianist CadmielBoțac and the cellist Cornelius Zirbo. Sonata in B minor for piano by Franz Liszt and Sonata op. 19 for cello and piano by Sergei Rachmaninoff enjoyed an emotional, out of this world performance, very much appreciated by the audience who applauded for minutes on end for the musicians' performance. The tour is organized by Radio Romania Musical, being assisted by Rotary Club Pipera; the tour continues on January 11th in Timisoara and on January 13th at the Radio Hall in Bucharest.

The pianist Daniel Goiți is found in the public, as he is the pianist Cadmiel Boțac's teacher from Cluj: "A total delight! Both protagonists are magnificent, in incredible progress - musical, instrumental and in my opinion also humanly, from what I noticed. It seems like they express different, they have developed, and it is more gratifying as things seem to be going down on our part. To them, they are going up very well. So, the progress is to the fullest. As Cadmiel's teacher, I am happy that everything goes well! That's the total pleasure. It was a wonderful evening! "

"I was very impressed by this recital. I have known Cadmiel since he was a child. I am also a pianist, so I understand the difficulty of the works and what progress he has made during this time. I could say that he is already a great artist… both him and the cellist, obviously, but I'd rather talk about Cadmiel first. I'm speaking by holding the desire to see him sing as often as possible in Romania, perhaps yearly during the season with the Bucharest Philharmonic, because he deserves it. Many times - and I apologize to say something more critical now - we hear strangers lower than this pianist, who is, I might say, a genius. So, thank you very much for bringing him to Cluj. The same can be said for the cellist. I think he has a brilliant career ahead of him. "- Mihai Diaconescu

"An exceptional recital! They are two entirely special young men. We have known them for a long time, and we have been following their career, which has gone through a fantastic progress. It was an exceptional evening, and we thank you for that." - Gabriel Banciu, professor at the Music Academy in Cluj

"I am truly excited because I was honoured to listen to two children who will become worthy performers in the interpretative arts. On the other hand, I'm happy that I was able to witness the student period of one of them, namely Cadmiel. And I wish Radio Romania Musical an eternal life from now on! " - Victor Dumănescu, conductor

Reportage made by Cristina Comandașu
Translated by Roberta Ana-Maria Gulerez,
University of Bucharest, Faculty of Foreign Languages and Literatures, MTTLC, year I
Corrected by Silvia Petrescu
Return to archived Events